Cloth of the month: An Ewe Chief’s Robe Cloth 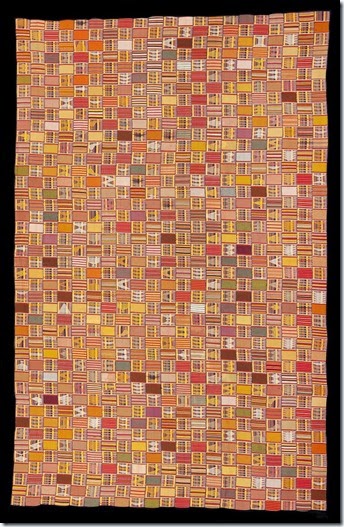 This month’s cloth is a fine Ewe chief’s robe in the classic style that alternates solid or striped weft-faced blocks with equal sized warp striped sections decorated with supplementary weft motifs. This style dates back at least to the start of the twentieth century and we can see a fine example worn by the Ewe chief Fia Dagadu III, in a photograph apparently taken in 1929 shown below. 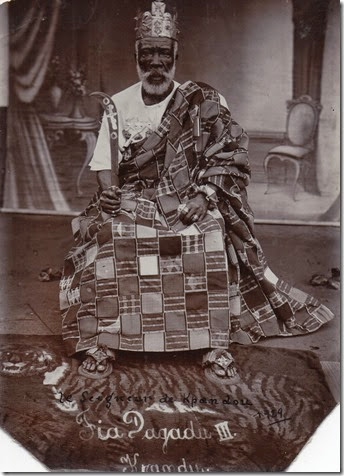 See my earlier blog post here for more about this chief. 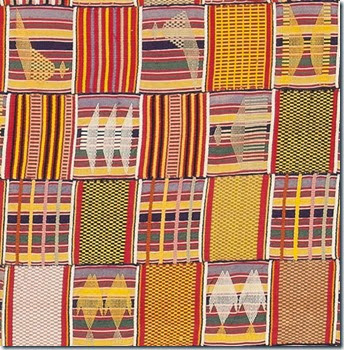 Supplementary or extra weft float motifs on this cloth include fish, mainly in pairs, chief’s stools, combs,  round pommelled swords (top left above) and as we see in the next image hands with fingers extended. In the main these are conventional images from the Ewe weaving repertoire and while they are named, do not have any particular symbolism. Rather they indicate to a viewer the skill of the weaver and the expense and luxury of the cloth and hence the wealth and prestige of the wearer.

Where the motifs do depart from tradition is in the hands with single raised fingers shown below. Rather than “giving the finger” as we might assume, these  are in part simply an elaboration and variation on a repeated motif that falls, as we will see, in a wider pattern of variation and repetition. However they are also a means of drawing attention to the hand motif that dominates a prominent row at the centre of the cloth. Proverbs play a key role in the culture of the region and images of hands and fingers evoke a range of proverbs, some of which may directly address the role of a chief and his followers. 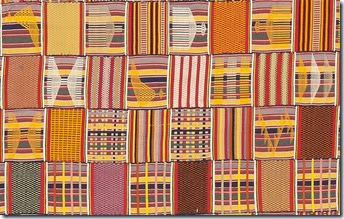 If we turn our attention from the extra weft motifs to the weft-faced blocks we see that repetition with differences, which emerged as a feature in the motifs, is explored to a much fuller extent. The master weaver uses the limited range of colours he has selected, together with a very small set of weaving techniques, to fill the set of equal sized blocks with subtly varied patterns, almost all of which differ slightly from their neighbours.

Click 0n the photos to enlarge. To view this cloth and others from our current stock in our gallery site click here.