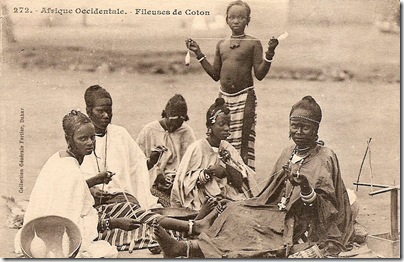 Edmond Fortier (1862-1928) was one of the most prolific photographers and postcard publishers active in West Africa in the early years of the colonial era. Based in Dakar, he published around 3,300 different postcards between 19808 and 1910, with numerous re-issue series subsequently. His work is quite well known and more details and examples may be found on these websites: Centre Edmond Fortier and The Postcards of Edmond Fortier. Here I want to focus on aspects of textile production at that period as shown in a small number of his photographs. Click on any picture for a larger view.

The first three photographs were taken on a journey Fortier made through the Futa Djallon region of Guinea in 1905, and are to my mind, among the most beautiful of his images. Above is a group of women spinning cotton, below a man weaving and some women dyeing with indigo. Note the woman at front left of the dyeing photo who is beating the dyed cloth to give a glazed finish. 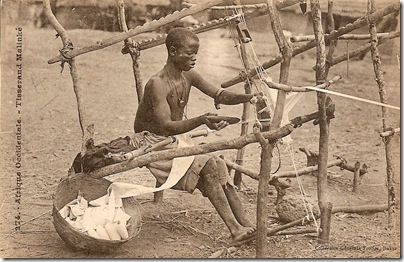 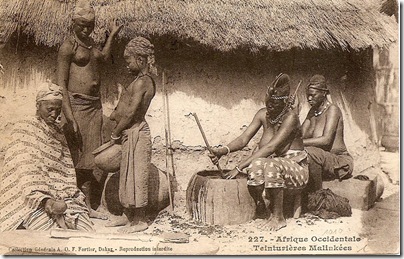 A second series, taken in the area of what is now Mali, probably 1905 or 1906, shows the stages of cotton preparation and weaving. 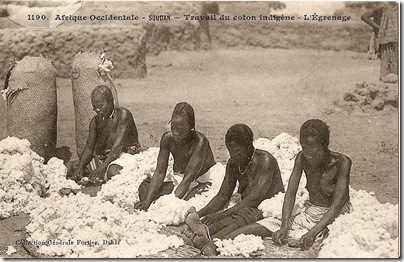 Ginning the cotton to remove the seeds. 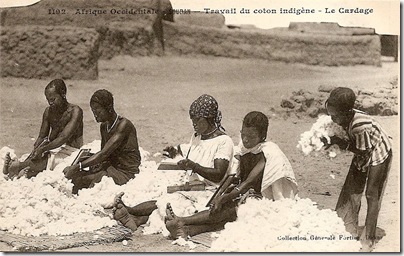 Carding to align the fibres. 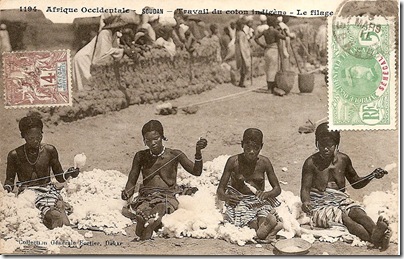 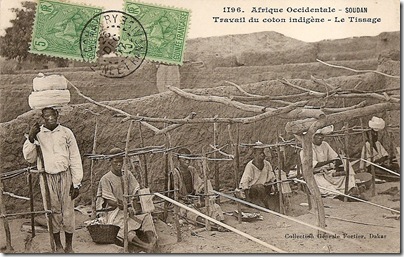 Weavers at work. Note the wheels of woven cloth strip carried by the man at left.

Below are the other weaving related images by Fortier that I am aware off. There may be still more that I have yet to locate. 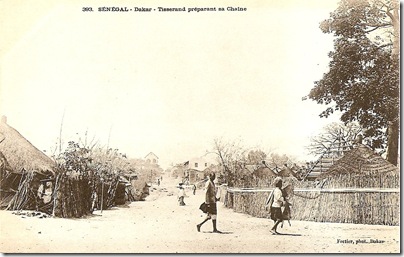 In the above photo, captioned Dakar, a weaver is preparing his warp threads stretched out along the fence at left side. 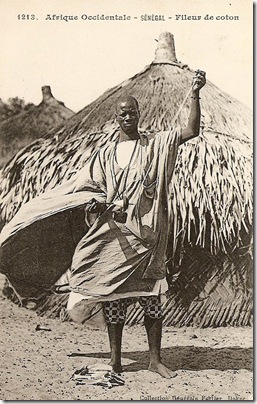 Spinning cotton. Most spinning in West Africa was done by women, but in some areas men also spun. 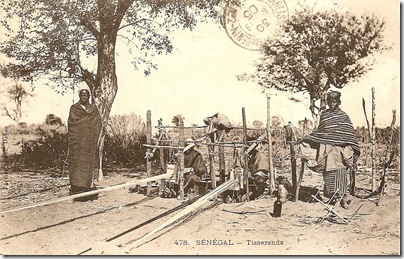 A beautiful image of weavers shaded by a tree. 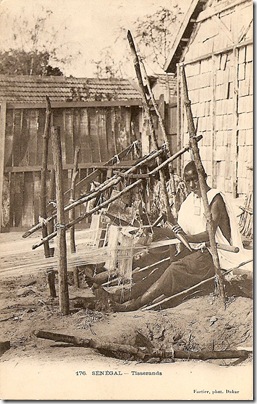 Looms in an urban Senegalese setting. We can note the different structures used for the Senegalese looms compared with those in Mali and Guinea shown above.

At this period French colonial authorities in West Africa attempted to finance their administration through a poll tax which, as few people had access to coinage, was also payable in cloth strips or wrappers (pagne.) The two photographs from Mali below give a glimpse of the scale of this process. 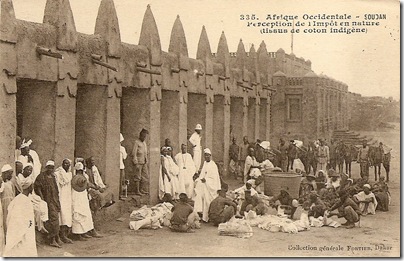 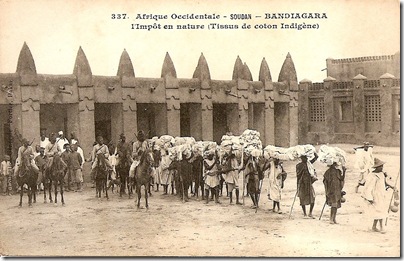 Finally, to give an idea of how woven cloths were worn, are four images showing aspects of dress in this region of West Africa 100 years ago. As is, albeit to a lesser extent, still often the case today, locally woven cloth was worn in conjunction with imported fabric for both ceremonial and everyday wear. 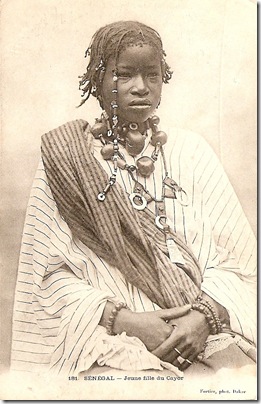 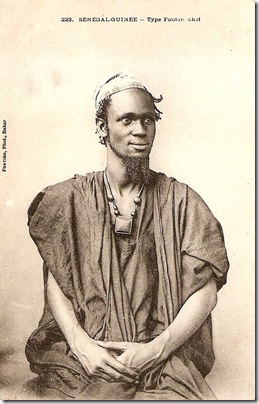 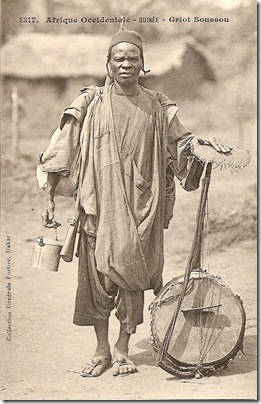 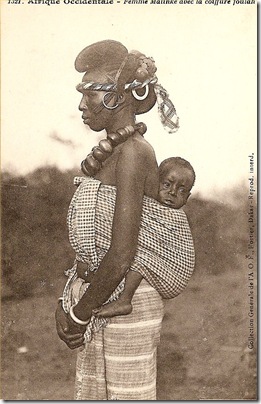 Posted by Duncan Clarke at 03:25 No comments: 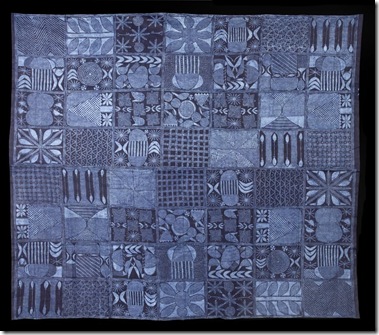 (click on the photo for a larger view. Image copyright Duncan Clarke 2011. Do not reproduce without permission.)

Adire eleko is a tradition of elaborate indigo dyed resist patterned cloths that flourished among the Yoruba people of south west Nigeria from the early C20th until the 1970s. Eleko means “with starch” and refers to the cassava starch hand painted on the cloth as a resist agent prior to dyeing with indigo, while adire is Yoruba for “tie and dye”, alluding to the earlier traditions of resist patterning from which this style was created.

The cloth shown above is a notably fine example of one of the classic adire eleko designs, called “Ibadandun”, which translates as “Ibadan is sweet or happy.” Ibadan, a large city north of Lagos, was, along with Abeokuta, the major centre where adire cloths were made. It was collected in the 1960s by Doig Simmonds, co-editor with Jane Barbour of the important book “Adire Cloth in Nigeria” (Institute of African Studies, Ibadan, 1971.)

In this post I will explore some of the designs that make up an Ibadandun, drawing on another publication by the late Jane Barbour that is still the most detailed documentation of adire designs (“Nigerian ‘Adire’ Cloths”, Baessler-Archiv, Neue Folge, Band XVIII, 1970.) Each completed cloth had a different combination of these designs, together with others, and individual variations on them. The interpretations that Barbour collected, a few of which are given below, seem to have been widely agreed in some cases, disputed in others, but are nevertheless worth noting. 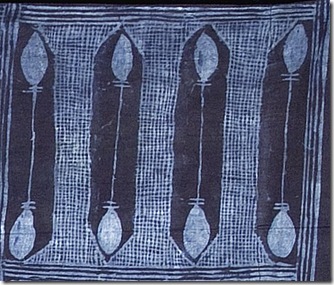 Spoons and the pillars of Mapo Hall. Mapo Hall is a grand pillared structure built in Ibadan in the late 1940s. 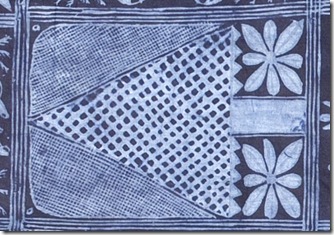 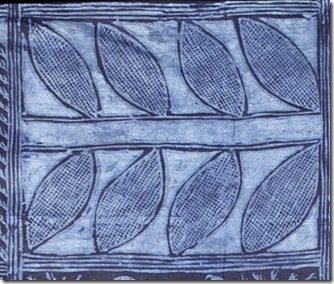 Eggs. I have heard this called cocoa pods. 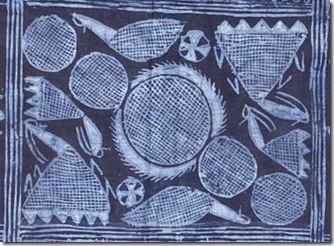 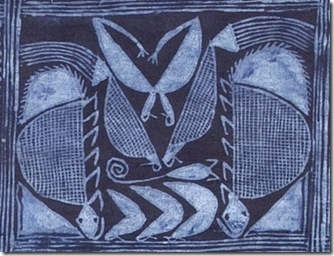 Posted by Duncan Clarke at 04:49 No comments: