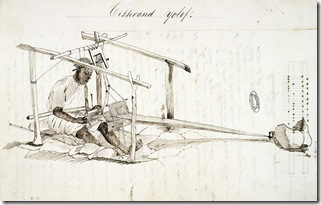 Although this sketch in the French National Archives is not the earliest depiction of a West African weaver it is exceptionally detailed and clear for a nineteenth century source. It was drawn by Isidore Hedde (1801-1880) a ribbon manufacturer from St. Etienne whose boat paused in Senegal on route to China as part of a French diplomatic mission. Undoubtedly Hedde’s own background in weaving contributed to the attention he paid to depicting the key loom components. The weaver is described as a slave and griot, although it seems likely, to me at least, that “slave” is Hedde’s gloss on the complex and anomalous status of weavers and other craftspeople in Senegambian societies. The drawing is accompanied by an important letter that describes at some length his observations on textile production in Goree at that date, including the surprising fact that there were 114 weavers on the small island. Click here to see more details.

By way of comparison, here is a Senegalese weaver depicted on an old postcard, dating from about 1905, by Charles Fortier (author’s collection.) 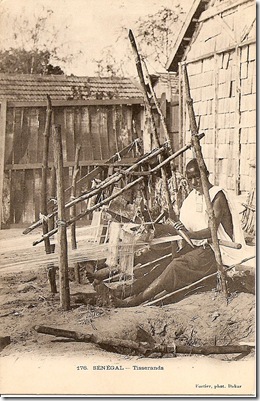 Featuring these three flags from a major European collection, this sale will be an important test of interest in Asafo flags at a major auction house after the new and dramatically higher prices they realised at Sotheby’s in the McAlpine Collection auctions in 2006 and 2007.

Posted by Duncan Clarke at 03:10 No comments:

An interesting video by Amanda Martinez traces links between African fashion designers, the struggles of the Malian cotton industry and excessive US subsidies to American cotton growers.

Weaving Dreams: Tracing Cotton and Fashion in Africa from Amanda Martinez on Vimeo.

Featured in the video is the remarkable Malian designer and activist Awa Meite much of whose work involves exploring the design possibilities of local cotton and Mali’s ancient textile traditions. Awa’a website is here . 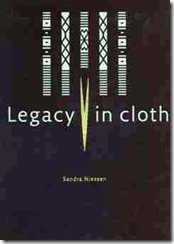 This massive and wonderful book on the weaving of the Batak peoples of Sumatra sets a new standard for the documentation of the textile heritage of an indigenous tradition. Combining two decades of fieldwork with detailed study of museum collections and archive photographs Sandra Niessen has produced an exhaustive and definitive study which repays both casual browsing and careful study. For scholars of African textile traditions it lays down a challenge in terms of depth and detail of documentation and illustration that is both inspiring and daunting. For more details, a pdf of a sample chapter, and a way to purchase a copy direct from Sandra visit her website here