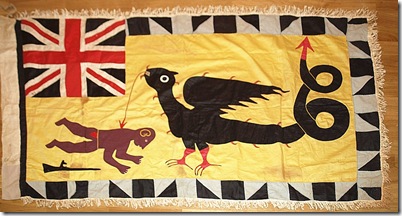 Our gallery of Fante Asafo flags is back online here after some months hiatus. We now have a superb selection of genuine flags drawn in part from a major private collection assembled in the 1980s and early 90s, and in part from our own contacts in Ghana over recent years. For information on distinguishing these scarce authentic flags from the modern copies widely available on the net see my earlier post here.

Indigo in West Africa – an introduction

Indigo was the foundation of numerous textile traditions throughout West Africa. For centuries before the introduction of synthetic dyes the ability to transform everyday white cotton into prized deep blue cloth was a mysterious and highly valuable skill passed on by specialist dyers from generation to generation. From the Tuareg nomads of the Sahara to the grassland kingdoms of Cameroon, indigo cloth signified wealth, abundance and fertility. A century ago blue and white striped cloth was the normal attire across a vast area from Senegal to Cameroon, while numerous traditions of "shibori" type resist pattern dyeing flourished. Indigo in West Africa was obtained from local plant sources, either indigofera or lonchocarpus cyanescans. Transforming the raw material into a successful dye vat was a complex process requiring great expertise and liable to unexplained failure. Inevitably it was usually surrounded with ritual prescriptions and prohibitions. The primary ingredients were dried balls of crushed leaves from indigo bearing plants, ash, and the dried residue from old vats. Cloth had to be dipped repeatedly in the fermented dye, exposed briefly to the air, then re-immersed. The number of dippings, and the strength and freshness of the dye determined the intensity of the resulting colour.

Appropriately it was women who dyed cloth with indigo in most areas, with the Yoruba of Nigeria and the Manding of Mali (especially the Soninke /Malinke) particularly well known for their expertise. Yoruba dyers paid tribute to a patron deity, Iya Mapo to ensure the success of the complex dye process.

Among the Hausa, where the export trade in prestige textiles was highly organised, male dyers working at communal dye pits were the basis of the wealth of the ancient city of Kano.

After the dyed cloth had dried it was customary to beat the fabric repeatedly with wooden beaters, which both pressed the fabric and imparted a shiny glaze. In some areas additional indigo paste was beaten into the cloth at this stage, subsequently rubbing off on the skin of the wearer in a much desired effect.

Today synthetic indigo and brightly coloured imported fabrics have largely displaced natural indigo except in remote regions and only in a few areas can one still see indigo cloths in regular use. For many cloths like those in our galleries dating from the early to mid-twentieth century represent the last remainders of a long tradition. Elsewhere though natural indigo continues to be used, for example by Dogon women in Mali and Mossi and Dioula in Burkina Faso. We have two selections of indigo dyed textiles, in our indigo gallery and our Nigerian adire resist dyed gallery, and other indigo dyed cloths available in our Francophone and Nigerian women's galleries. 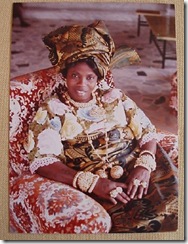 Advance notice of an interesting exhibition. From October 2010 to January 2011 the Ethnology Museum in Vienna will have a major exhibition on lace fabrics in Nigeria, in collaboration with the National Museum, Lagos. The show will then transfer to Lagos from March to Jun 2011. Austria is a major producer of lace for the West African market. A substantial catalogue in English and German editions will accompany the show. More details later in the year.

Some plates from “Nigeria in Costume” published by the Shell Company of Nigeria to mark Nigerian Independence in 1960 and with a foreword by the then Prime Minister Sir Abubakar Tafawa Balewa. Fifty years on this book is a very obscure curiosity and I was pleased to find a copy in one of the few surviving bookshops in Charing Cross Road. The plates are of paintings by John Danford.