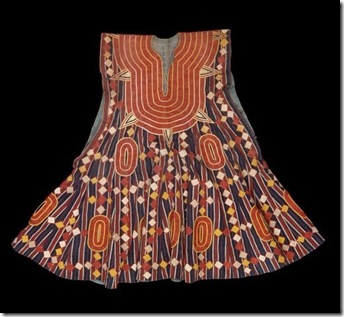 “The kansawu is a “predator” tunic, designed to give freedom of movement to the arms and hands. However the presence of pockets means this is an item of clothing of the court, even a royal item. The quality and the extent of the embroidery, undoubtedly inspired by workshops in the Yoruba and Hausa territory, indicate its value and the rank of its wearer. This item of clothing was a joint work between the weavers of Gbekon Huegbo and Hounli, the cutting workshop and the Yemadje embroiderers of the Hountondji district.” [Abomey, Benin Republic.] 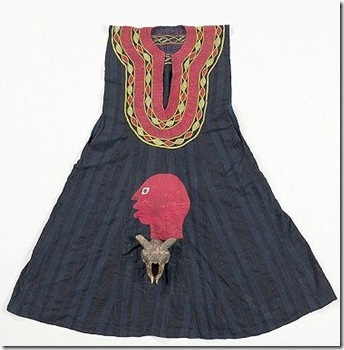 “Robe of Xagla, the migan of Guez0 (1818-1858). On the front a goats’ skull, from which the migan drank alcohol in private, before the sacrifices. Inside, a human jawbone, on which was eaten the powder of strength. the goats’ head has been daubed with human blood. (…) Robe worn when an enemy king or a particularly redoubtable individual was about to be exexcuted.” (Inv. Musee de l’Homme by B. Maupoil, 1936.) “

(Source:  Gaëlle Beaujean-Baltzer ed. Artistes D’Abomey – Fondation Zinsou, 2009). I would urge anyone to track down this remarkable and beautifully designed catalogue/book.