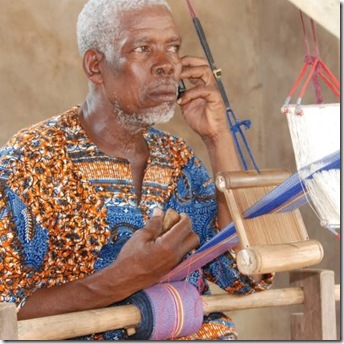 To mark the recent passing of Bobbo Ahiagble, who was undoubtedly the best known and most successful Ewe master weaver and kente entrepreneur we reproduce below a brief biography written a few years back for the site africancrafts.com.

“Gilbert "Bobbo" Ahiagble, of the Ewe ethnic group is a Master Kente Cloth Weaver from the Volta Region of Ghana.

He began assisting his father by winding bobbins at the age of three and moved onto the West African loom as soon as his legs could reach the treadles, at around the age of nine. He obtained a solid formal education also and his academic abilities opened doors for him and he soon received a diploma as a secondary school teacher, which obliged him to make a choice at the age of 21, to become a teacher or to remain a weaver. Influenced by words he heard from his Peace Corps math teacher, he combined the two and became a teacher of Kente cloth weaving.

Bobbo was first invited to the USA in 1975 as an Artist-In-Residence at the Museum of African Art, then a small, private museum which became part of the Smithsonian Institution several years later. His skills as a communicator soon gave him the title of "Cultural Ambassador of Kente Cloth" and continuous invitations to work abroad came from Switzerland, Canada and the USA. Most recently he taught American fiber artists the fine art of Kente weaving in a workshop held in Atlanta at the prestigeous conference of the Handweavers Guild of America, "Convergence".

Bobbo has had a major influence on traditional West African strip cloth weavers beyond the borders of Ghana. He serves as a spokesperson for the power in the language of Kente cloth, filled with symbolic proverbs present to enrich the lives of everyone ready to listen and learn.

Just recently he has co-authored a children's book, titled Master Weaver from Ghana, with Louise S. Meyer, with outstanding photographs of his home town taken by Nestor Hernandez, a Washington, DC based documentary photographer. And he has built a school and dormitory in Denu, called the Craft Institute of Kente Weaving, where student groups can stay and learn traditional Kente cloth weaving.”

I only met Bobbo on one occasion in 2008 at his base in Denu, but was pleased to collect several of his cloths, one of which (shown below) is now in the collection of the British Museum. 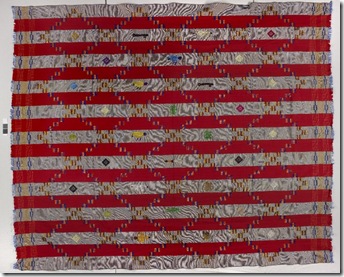 Virtually every expat who spent time in Accra over the past three decades knew Bobbo and he will be fondly remembered worldwide. Louise Meyer has organised an event to celebrate and remember him in Washington on August 4th. Details below: 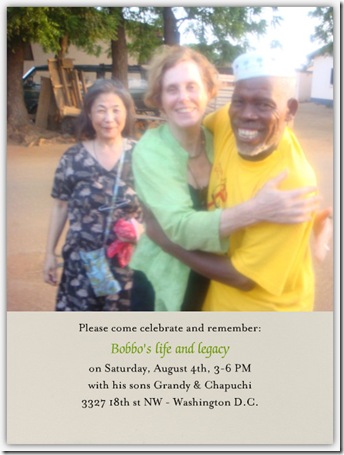