A Liberian Rice Bag–weaving without a loom.. 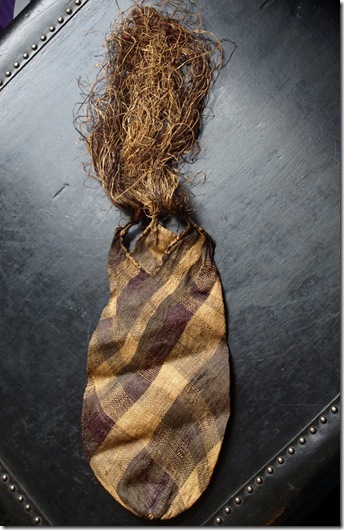 Drifts of slowly decaying black plastic bags are an all too frequent site in even the remotest villages in West Africa in recent years. Today’s post looks back to an earlier time when in at least one region of Africa simple and beautiful bags were made locally using dried fibres from the raffia palm. In Liberia rice was the staple crop and women carried it home from the market in small (less than 30 cm length plus fringe) finely woven bags decorated with check patterns. 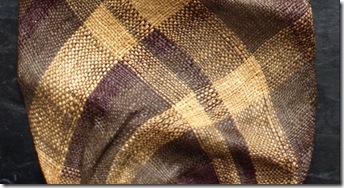 Although represented in the “material culture” collections of a number of museums, these bags would have been used and discarded many decades ago and are probably impossible to collect today. I was very happy to find this example recently among a group of artefacts collected over the years by an American missionary family. They are created without a loom, using bundles of warp fibres tied at one end to a post and divided into three groups, with a simple string heddle in each group used to create the shed allowing weft threads to be inserted by hand. A seamless tube is created which is sealed with a knot at the bottom and left open with a long fringe at the top. The same technique is used by the Dida people of Ivory Coast to weave plain raffia tubes that are later tie dyed to create their now well-known fabrics. 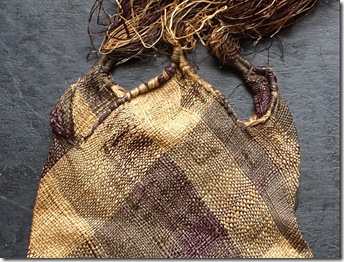 The photo below shows a Loma woman making a raffia bag in Guinea close to the Liberia border. (H. Labouret, before 1933. reproduced from Karl-Ferdinand Schaedler Weaving in Africa (Pantterra Verlag, Munich, 1987.) 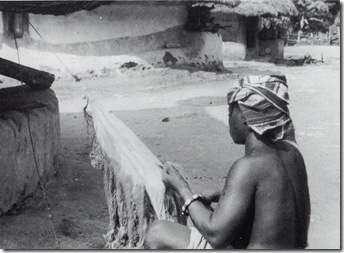 For more information, images of several bags in a museum collection, an early photo of a Dan man making a bag, and a fuller description of the technique see Monni Adams and T. Rose Holdcraft Dida Woven Raffia Cloth from Cote D’Ivoire in African Arts magazine XXV (3) 1992.