Agbada: embroidered robe traditions in Nigeria and beyond 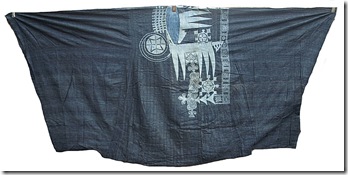 Agbada is the Yoruba name for a type of flowing wide sleeved robe, usually decorated with embroidery, which is worn throughout much of Nigeria by important men, such as kings and chiefs, and on ceremonial occasions like weddings and funerals. The Hausa name for the robes is riga. Although today they are often still made from hand-woven cloth, the painstaking and beautiful hand embroidery that was used in the past is very rarely seen. Fine old robes have become family heirlooms passed on from father to son and worn with pride at major celebrations. In the past prestige robes were traded over vast distances and similar or related garments are found throughout much of West Africa. 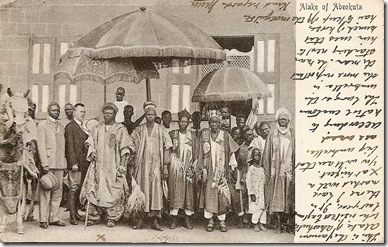 Vintage postcard, circa 1900, author’s collection. (Click to enlarge) The Alake of Abeokuta was the senior king of the leading town of the Egba Yoruba in south western Nigeria.

During the late eighteenth and the early part of the nineteenth century the existing order of power in much of what is now Nigeria was upset by the impact of an Islamic jihad inspired by the Muslim Fulani leader Uthman dan Fodio. Across the city states of the Hausa in the North, down to the Nupe people on the banks of the river Niger, and as far South as the Yoruba city of Ilorin rulers were swept aside to be replaced by Muslim emirates. The main Yoruba power of Oyo was defeated and their capital city abandoned in the 1830s. The new Fulani rulers brought with them a style of male dress consisting of flowing robes and huge baggy trousers adapted for horseback riding. They also bought an Islamic tradition of "robes of honour" where embroidered gowns and the flowing turbans worn with them became badges of office for both rulers and court officials. Emirs and other rulers purchased the finest robes for themselves and distributed numerous others to their courtiers. An elaborate trade network developed, with both Nupe and Yoruba weavers and embroiderers, along with specialist tailors, cloth beaters, and dyers, serving the the main emirates. Rulers of other courts such as Yoruba kings beyond the reach of Fulani power adopted the same style of dress, and in the twentieth century the gowns became the accepted dress of important men across a large area of Nigeria and into neighbouring countries. The best robes were tailored from highly prestigious cloths, including plain white handspun cotton fari, beige local wild silk tsamiya (Yoruba name sanyan), imported magenta (wine red) silk alharini (Yoruba alaari) and handspun indigo-dyed saki (known to the Yoruba as etu.) They were embroidered with variations on two classic designs known as "two knives" and "eight knives". It is thought that the embroidery may have had a protective role with elements related to Islamic amulet design (see the previous post on “magic squares” etc), as well as a practical function in strengthening the pocket and neck of the gown. In recent years changes in fashion, the introduction of embroidering machines, and the spread of luxury imported cloths have led to a decline in the demand for top quality hand-made robes and the old skills of weaving fine hand-spun cotton and of hand embroidery are almost lost. 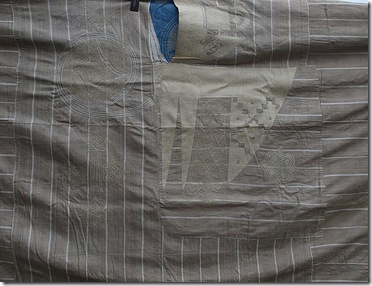 Detail of “two knives” embroidery design on natural beige wild silk ground. Click on the photo to enlarge. For a full view of the robe go to our gallery page here. 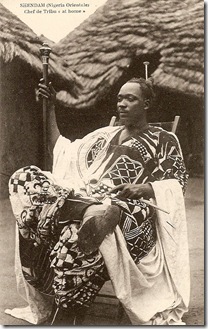 Vintage postcard, circa 1910, authors collection. A chief of Shendam in central Nigeria. As well as his robe he wears embroidered trousers of the style shown below. 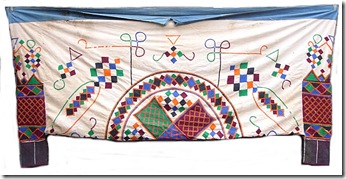 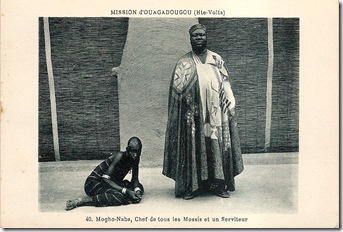 Vintage postcard, circa 1910, authors collection. The Moro Naba, king of the Mossi people in Ouagadougou, now in Burkina Faso. (Click to enlarge.)

To visit our web gallery and view robes currently in stock click here.