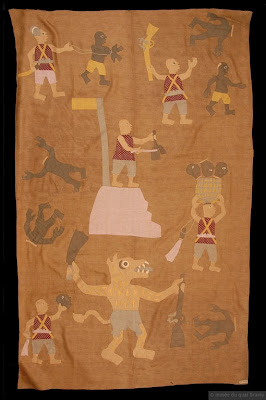 Until 31 January 2010 there is a superb exhibition at the musee du quai Branly, Paris, focussing on the court artists who supplied the dramatic sculpture, banners, robes etc. to the powerful Fon kingdom at Abomey in the Republic of Benin. Alongside iconic statues such as the celebrated royal "bocio" figures the exhibition provides African textile enthusiasts this provides a rare opportunity to see part of the worlds two major collections of the celebrated Fon appliqué banners, including some examples (not shown here) presented by the Fon king to the French Emperor Napoleon III in 1865. 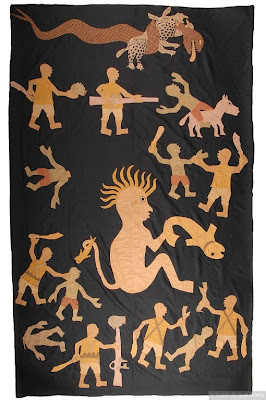 Also of note are two fine examples of embroidered robes worn at the Abomey court. Embroidered on strip woven cloth, as in this piece, or on imported fabric, the specific cut and embroidery layout of these robes is distinctive to the Fon, despite affinities with other types in the family of West African prestige robes. 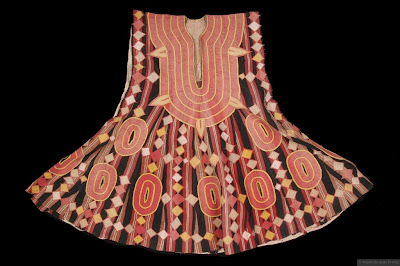 This strip woven cloth is the only example I know of in the style. According to the collection data it is said to have been woven by Yavedo and Goyomo, two wives of the Fon king Ghezo and formed part of the presentation to Napoleon III in 1865. 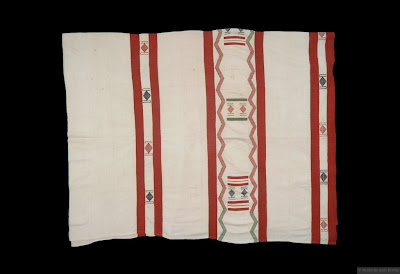 There is an interesting booklet "Artistes d'Abomey" (Beaux Arts editions) that accompanies the show, and a catalogue with the same title that appears not yet to be available. More info here.
Posted by Duncan Clarke at 02:40