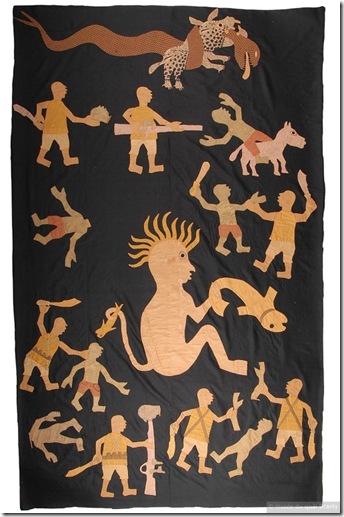 These remarkable appliqué banners are among the most important items of royal court art from the Kingdom of Dahomey, now in the Republic of Benin. Until they transferred their role to the making of tourist arts in the mid twentieth century, families of specialist textile workers at the court in Abomey supplied dramatic wall hangings that praised the king and illustrated key aspects of his social identity and achievements. The Quai Branly collection, without doubt the most important outside the Palace Museum in Abomey itself, includes early C20th examples and some pieces presented to the French ruler Napoleon III in 1856. 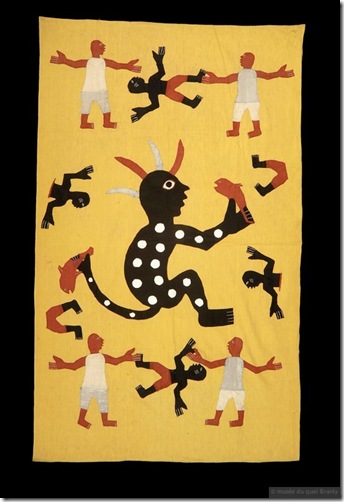 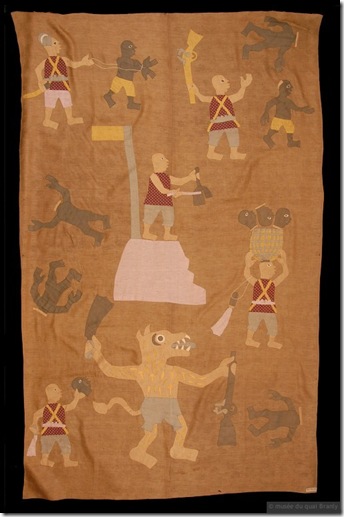 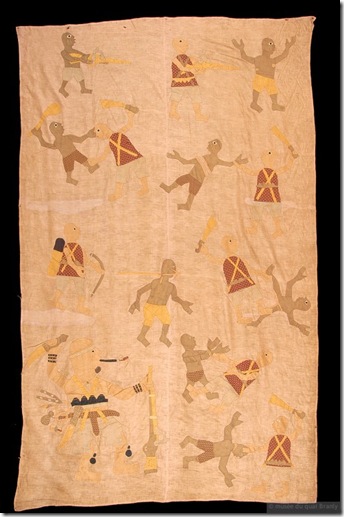 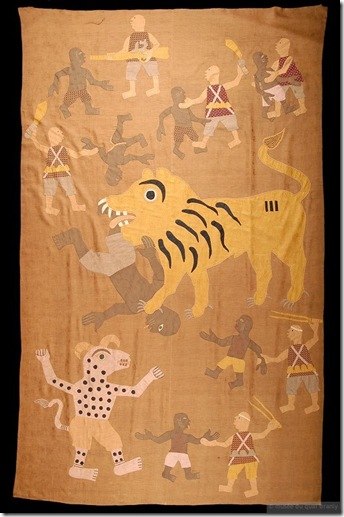 The banner above, made by the Yémadjé family in 1911 or 1912 as a copy of a banner in the palace collection, shows King Glèlè, represented as the lion devouring his enemies, at lower left a male panther, mythical ancestor of the royal dynasty, around them the soldiers of the king capturing his enemies. (Source:  Gaëlle Beaujean-Baltzer ed. Artistes D’Abomey – Fondation Zinsou, 2009) 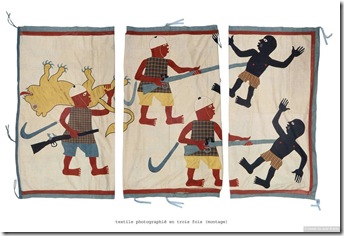 Above – one of the banners presented to Napoleon III in 1856.

Gabin Djimassé, a Benin historian, wrote the following brief history of the banners:

“Unlike the forge, appliqué cloth had not been present in Danhomè. It bacame known in the kingdom in the reign of King Agadja (1711-1742). The craft owes its origin to this king who captured two master appliqué workers in the region of Avranku, in the north of Porto-Novo, and set them up at  Abomey, entirely at his own service. they were Hantan and Zinflou (Hankantan, Zinflou mondo), names which translate literally as “The sepals of cereals which served to make fire are finished, and darkness has set in.”

It is important to note that the appliqué cloth of the two craftsmen was made on a background of raffia, rather than cloth, which is used nowadays. the king took time to supply cloth to these families of craftsmen, for it was one of the rare and precious products that was imported, exchanged by French traders for slaves.

This art progressed greatly in the reign of King Agonglo (1789-1797), especially wit h the arrival of Yemadje in Abomey. Unlike Hantan and Zinflou, Yemadje was endowed and “married” by King Agonglo. This unusual situation made the man an ahossi, that is to say a “wife” of the king. as such he had access to the whole palace, including the interior court which was generally reserved for the king and his wives. The king led his private life in the inner court. Through such proximity with the king, Yemadje finally supplanted Hantan and Zinflou. As from then he became the principal appliqué worker, to whom all royal commissions were confided.” (Source:  Gaëlle Beaujean-Baltzer ed. Artistes D’Abomey – Fondation Zinsou, 2009) 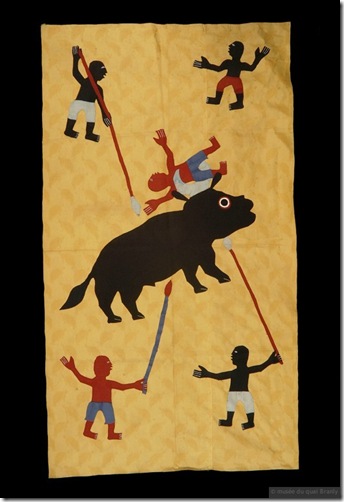 The Musee du Quai Branly, Paris, holds one of the world’s most significant collections of West African textiles, with particular strength in some of the former French colonies. The entire collection is accessible on line  via their website. Check the textiles button then enter the country name in the box below.