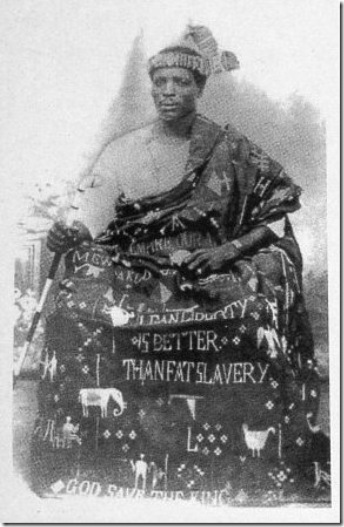 “El Anatsui’s father Fiawodzo Anatsui, wearing a narrow band- woven cloth on the of the Price of Wales’s visit to the Gold Coast colony in 1925” – photo from El Anatsui: Art and Life by Susan Mullin Vogel (Prestel 2012.)

Anatsui’s father was a master weaver and I think may be assumed to have woven this remarkable cloth himself. The texts we can see read “Lean liberty is better than fat slavery” and “God save the King.” Woven texts in English, usually some kind of homily or brief saying drawn from Christian literature rather than the Ghanaian tradition of proverbs were often a feature of  some Ewe cloths in this period and can be seen as an expression of pride in newly attained literacy. However the style of this cloth with it’s detailed figurative motifs and in particular the clusters of small geometric patterns on a plain ground is distinctive.

The only similar cloth I am aware of is shown below in a photograph from Malika Kraamer’s Phd thesis Colouful Changes: Two Hundred Years of Social and Design History in the Hand-woven Textiles of the Ewe-speaking Regions of Ghana and Togo (1800-2000) (SOAS, 2005). 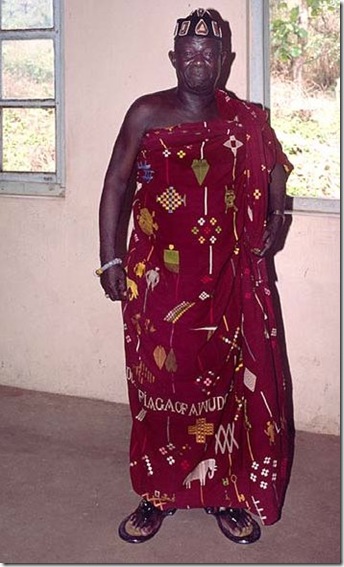 Kraamer notes (page 446) that this cloth is called “father of the chief” and was woven in the 1940s by a weaver called Togbe (chief) Gana. I wonder is perhaps he was an apprentice of Anatsui senior.