Some more Ewe cloths on our gallery today 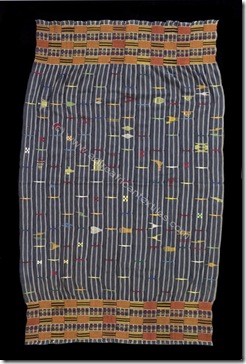 This Ewe woman's cloth from the Volta region of Ghana is an example of the influence of Asante kente cloths on Ewe textile design. An Asante style border at each end of the cloth frames a central field in which figurative and geometric supplementary weft float motifs are scattered. Rayon floats and borders on a cotton ground. Cloth has a small frayed area along part of one edge but otherwise is in good condition. It dates from circa 1950.  For details and other vintage Ewe textiles see our gallery here

Posted by Duncan Clarke at 05:40 No comments:

“This weekend-long symposium brings The Textile Museum’s fall exhibition, Weaving Abstraction: Kuba Textiles and the Woven Art of Central Africa, to life. Join renowned scholars and authors as they shed light on why Kuba textiles are considered among the most beautiful and influential of African art forms.

Emerging in the early 17th century, the Kuba kingdom grew into a powerful and wealthy confederation of nearly 20 different ethnic groups located in what is now the Democratic Republic of Congo. The Kuba are renowned as masters of the textile arts and surface design. The improvisational, abstract aesthetic of Kuba textiles captivated the members of the European avant-garde movement between 1910 and 1930, and its influences can be seen through modernism, fashion, fabric design, and the decorative arts.

Six presenters will place this artistic tradition in the context of Central African culture and the world of ritual the textiles were created for, in addition to exploring the lasting influence of their striking designs.”

Very interesting program with well chosen speakers. I hope to be there…

Posted by Duncan Clarke at 06:35 No comments: 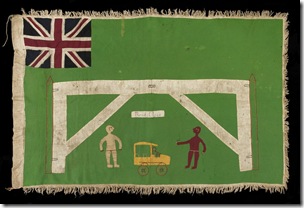 Charming old flag with a car and two men in front of a road block / barrier with a sign reading "Road Close."  Background is felt. Good condition, minor marks.  Dates from circa 1930 - 50s.  Details and other flags in our gallery here.

Posted by Duncan Clarke at 06:40 No comments:

African Headwear: Beyond Fashion–new exhibition at Dallas Museum of Art

African Headwear: Beyond Fashion, an exhibition of approximately fifty objects from the Museum’s collection of African art, internationally acclaimed as one of the top five of its kind in the United States, explores the way in which headwear signifies status in traditional African societies. Often made of unusual materials, such as the skin from a pangolin (spiny anteater), wood and copper, various types of nutshells, lion mane, and human hair, African headwear can also include glass beads, plastic buttons, and ostrich feathers used in unfamiliar ways.

For example, a sacred crown worn by Yoruba kings in Nigeria is lavishly beaded and adorned with sculpted birds and modeled human faces. Tiered basketry hats worn by Ekonda chiefs from the Democratic Republic of the Congo feature hammered brass discs. Baule chiefs in the Côte d’Ivoire (Ivory Coast) wear velvet pillbox-style hats on which symbolic gold-leaf ornaments are attached.

Among the exhibition’s highlights, which also include significant works from local private collections, is a work from the Lega, in the Democratic Republic of the Congo, where a man wearing a hat adorned with elephant tails would be recognized as belonging to the highest level of the association.

Another hat is something a Himba bride from southern Africa would wear on her wedding day. Made of soft calfskin imbued with butter and red ocher and decorated with iron beads, its large earflaps prevent the bride from looking in any direction but forward—toward her new husband’s home.