New light on an Ewe chief 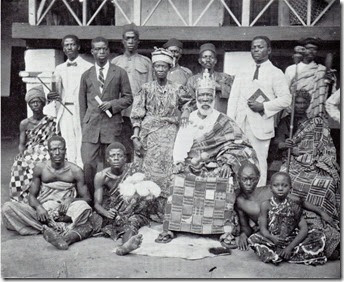 In her pioneering book West African Weaving (Duckworth Press, 1975) Venice Lamb published the photograph above (source: Wilmarth family private collection) depicting an Ewe chief with  his court retainers.  She suggested that it showed an Adangbe chief and goes on to describe the features of the cloth that he is wearing as distinctive of what she calls “an earlier type of Adangbe design” , although it is unclear if she has any source for the geographic identification or is basing it only on what she perceived to be the origin of the cloth. She also regarded the picture as dating from the nineteenth century.  This photograph is interesting as there are relatively few early photographs of Ewe chiefs, perhaps because they lacked the elaborate large scale ceremonials and court paraphernalia of the Asante as well as being of lesser political significance in the Gold Coast colony. 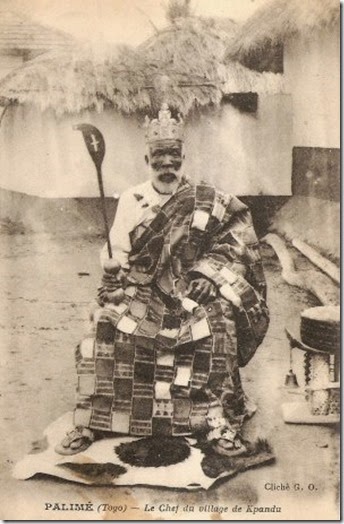 For some years I have had a postcard that clearly shows the same man, wearing the same cloth (and the same rather odd crown.) With the photographer identified as “Cliché G.O.” the card is captioned “Palimé (Togo) – Le Chef du village de Kpandu”.  Palimé (Kpalimé) is a town in Togo quite close to the Ghana border, while Kpandu is on the Ghana side on, now on the shore of Lake Volta. Both fall within the more northern cluster of Ewe weaving groups near the town of Hohoe  (that Lamb rather confusingly identifies as the Central Ewe) rather than the more southerly Adangbe or the coastal Anlo.  Whilst there is no guarantee that the caption information is correct (misleading captions on postcards from this period are quite widespread) we can at least note that before the 1914-18 war Togo was a German colony and postcards before that date are captioned in German rather than French.

Malika Kraamer, in her unpublished Phd thesis on Ewe weaving (Colourful changes: two hundred years of design and social history in the hand-woven textiles of the Ewe speaking regions of Ghana and Togo (1800-2000), SOAS, 2005 –now online here) discusses the corpus of early photographs showing Ewe textiles (most drawn from the archives of the Basel and Bremen missions and mainly online here). Among the images that she found with the Bremen Mission is a third photograph of the same chief, again in the same attire. She notes that the same unidentified chief was shown by Lamb and perhaps influenced by her suggests it is a late C19th or early C20th image (at that point it seems she did not have access to the postcard view.)

A couple of weeks ago I was able to buy a group of three photographs from a French source whose grandfather was a trader in Togo in the early part of the twentieth century. One of these photographs, shown below, is a print of the same image as that in the Bremen archive. 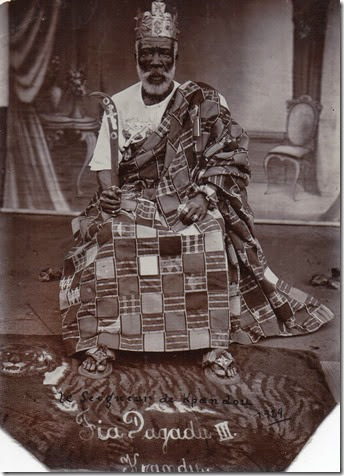 In addition to finally identifying this distinguished looking chief, for me these images raise a number of interesting questions about Ewe textile production and use. Why is the same cloth worn in all three photographs ? Is it the only one that he had or his favourite among several ? Might there be other, earlier or later, photographs of him wearing a different cloth ?

What can we say about the cloth itself ? Malika Kraamer identifies the style as atisue based on the short weft faced block structure. As she discussed, both the naming and the design evolution of Ewe textiles were extremely fluid and complex. This type of cloth, in which almost square weft-faced blocks alternate with similarly sized warp-faced sections decorated with supplementary weft float motifs, was certainly among the more elaborate and highly prized types woven in the first half of the twentieth century. A fine example that is on our gallery at the moment is shown below. 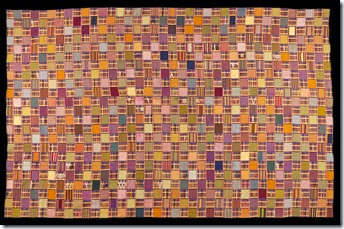 Is Venice Lamb correct in attributing this style of cloth primarily to the Adangbe weavers (Kraamer calls the same group Agotime after the main weaving village in the area) ? I would suggest that at present the necessary field research that might perhaps allow us to clearly attribute many of the huge variety of Ewe cloths to specific locales has yet to be carried out, although based on Kraamer’s work some preliminary suggestions for some styles might be possible How did geographical variation interact with individual innovation, workshop styles etcetera ? We simply don’t know.  We do know however that cloths are highly mobile artefacts, with prized pieces being traded over a wide area. Did master weavers whose work was in demand also move to supply wealthy patrons ?

And what about the odd crown ? Both colonial authorities and European traders imported items of royal regalia and prestige goods that they gave or sold to local rulers they wished to influence. The tiger patterned rug in the third photograph clearly falls into this group and I would suggest the crown does also.

Posted by Duncan Clarke at 06:01 No comments:

Cloth of the month: an unusual Ewe chief’s robe 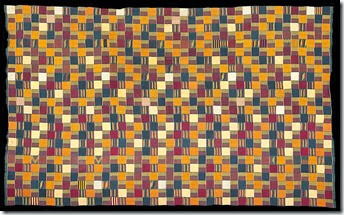 E787 - Exceptional Ewe chief’s cloth in superb, complete, condition. This unique cloth provides a textbook exemplar of the way in which an Ewe master weaver can constrain his use of colours and patterns to only a small subset of their available repertoire and then explore and improvise on the possibilities offered to create a new and distinctive design. Red and then yellow predominate on a dark green background. Weft faced blocks alternate with a double zigzag supplementary weft float pattern. 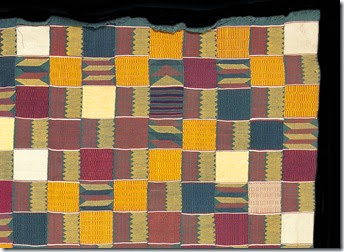 This pattern is subtly modified in a few places or substituted in others by a wider single zigzag in varying colours, note for example in the central strip of the detail below. The colours of the weft faced blocks are varied and occasional pattern changes introduced within them. 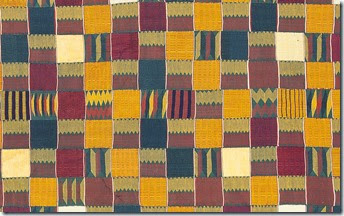 The result is not only a unique pattern but an exploration of similarity and difference to beautiful effect. 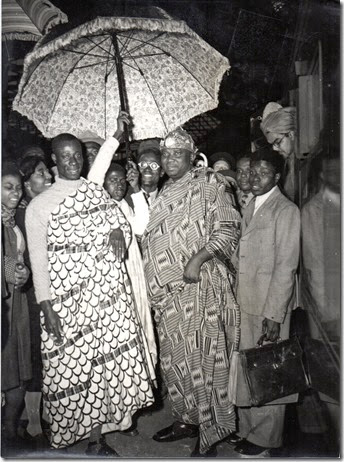 Caption: “A party of African rulers, here for the African Conference opening on Wednesday at Lancaster house, arrived at Euston this evening. (L- R) Essuma Jahene and Sir Tsibu Daku.”

Posted by Duncan Clarke at 03:17 No comments: