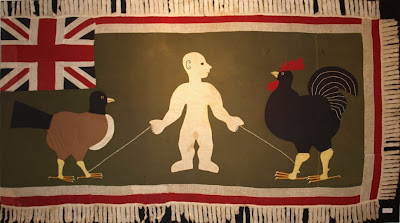 A genuine Fante Asafo flag from our gallery, age circa 1920-40. Illustrates the proverb "we control the rooster and the clock bird", i.e. we are so strong that we can even control time.
So how do we tell a real authentic flag from a fake ? What do we mean by fake in this context ? In African art circles there is a widely accepted (albeit intellectually problematic) definition of authenticity. An authentic object is one which was made for local use and which received local use before being sold. An object that was made specifically to be sold on the art market or tourist market is not considered to be authentic and except in exceptional cases will never have any significant monetary value however nice it looks. Both the condition and the design of flags provide useful indications of age and authenticity. Flags that have received local use over any significant length of time show signs of that use such as small marks, holes, stains, bleaching from the sun, colour run, damage to and curling of the tassels on the border etc. Contrary to what some dealers in the Accra tourist market hope, leaving a new flag on the roof for a few days in the rainy season does not closely mimic the effect of local use, it just makes a new flag look dusty and rained on. Old fabric has a different look and feel from new that is extremely hard to fake. So luckily if you look carefully it is very easy to distinguish new flags from old.
Turning to the design, the first important point to note is that contrary to what is often asserted the use of a version of the British Union flag in the corner (the canton) does NOT mean that the flag was made before Ghanaian independence in 1957. Clearly a Ghana flag indicates a date after 1957 when it was adopted, but the reverse is not true. There could be a number of reasons why locally used flags were still ordered with the Union Jack canton, most obviously to replace an important old flag that was damaged beyond use. Moreover the flags made in the last decade for sale in the Accra art market almost invariably have the British flag. 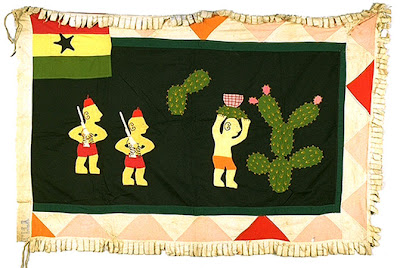 This is an authentic, well made and designed post-Independence flag from the collection of the Textile Museum, Washington. It illustrates the boast " We can carry water in a basket using a cactus as a head cushion" i.e. "we can do the impossible."
Genuine flags were individually ordered, usually from a professional flag maker, by Asafo society officers, to mark their promotion to a higher rank, and the design was a carefully thought out project intended to communicate a specific saying or to mark a particular historical event. As a result most authentic flags have a design coherence, graphic sensibility, and visual impact that is immediately apparent. On the other hand when a dealer places a bulk order for ten pieces to be delivered as soon as possible, the result is usually slapdash workmanship, meaningless designs or poor copies, and a resulting lack of visual impact. I am not going to post one of these but a quick search on Google or Ebay will bring up numerous examples.
One final clue is to look at the price. Authentic old flags are now very hard to source and sell internationally for thousands of dollars. Flags that are for sale for a few hundred dollars are very unlikely to be old...
Buying new flags, providing you know that they are new, and you are paying the right new price for them, gives much needed income to very poor people in Ghanaian villages. There is nothing wrong with new flags as such, they become "fakes" when someone sells them as old. Most are poorly made but if you look carefully and choose examples that are well designed and well made your purchase will also encourage the continuation of old traditions of artistry and skill. There are still some flag makers doing good work and more sales would encourage them to continue. Below is a fine new flag I found while researching this post - more here 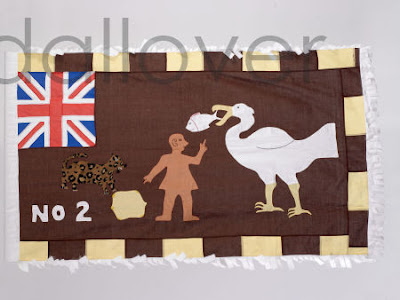 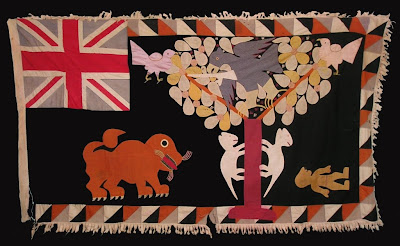 A high percentage of the Fante Asafo flags for sale on the net are recently made copies or "fakes." Today's post (a flag from a private collection in Italy, circa 1930-40s) is a quick reminder of how wonderful genuine flags from the Fante Asafo societies can be. I am working on a longer post on this subject but in the meantime for further info see here and here..
Posted by Duncan Clarke at 02:13 No comments: 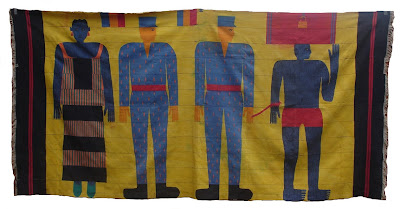 In the 1950s large brightly coloured blankets called tapis with solid blocks of colour began to be a fashionable gift at weddings, beginning to displace older traditions of indigo blue and white cotton and brown wool blankets. They were used to adorn the walls of the house during weddings and as covers for the newly imported iron beds. At some point in the 1960s one master weaver called Abdurrahman Bura Bocoum reconfigured this new style of coloured blankets so that the weft blocks depicted large figures of humans and animals. Soldiers became the predominant theme of these cloths following the military coup in Mali in 1968. It is not known when he died, but Bocoum was succeeded by at least three other weavers. One of this second generation, also now dead, was Mama Diarra Kiba, who wove the yellow ground cloth shown above, which is now on our website here. 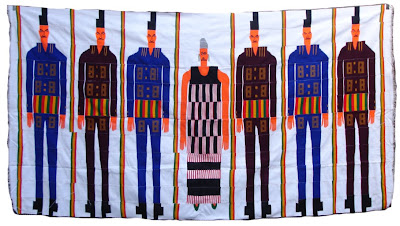 This piece with thinner, arguably cruder, figures is by Jaara Ila Jigannde. 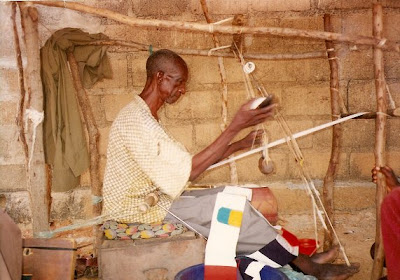 The best known of this second generation of weavers is Oumar Bocoum, shown here. Now an elderly man who no longer weaves, his work featured in the African Textile exhibition at the Barbican Art Gallery, London, and at the Kennedy Center in 1995. The remaining cloths shown here are a selection of typical Oumar Bocoum pieces. They would have been commissioned from the weaver as prestige hangings for display during a wedding, then later sold. We also have a Bocoum blanket at our gallery - more details here. For more information see Bernhard Gardi ed. "Woven Beauty: The Art of West African Textiles" (Basel, 2009). 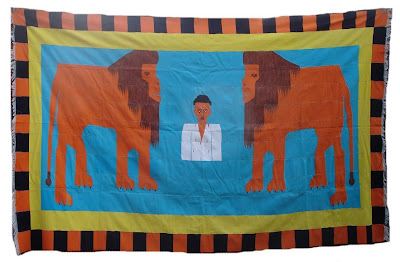 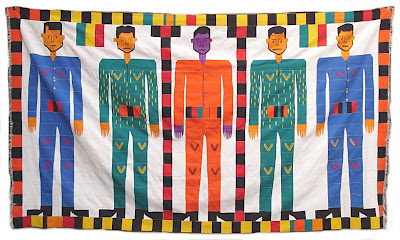 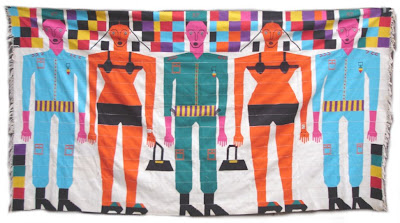 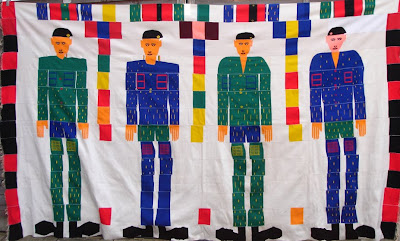 Taken in the small town of Lafiagi near the river Niger in central Nigeria in 2006, the photo shows a Nupe woman weaving a two panel wrapper cloth. The Nupe live to the north and north east of the Yoruba, mainly in Niger State, and today make up probably the second most numerous group of female weavers in the country after the Ebira. To see some Nupe cloths and other Nigerian women's cloths visit our website at http://www.adire.clara.net/nigerianwomensgallery.htm 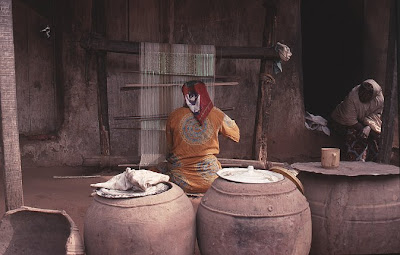 Posted by Duncan Clarke at 02:23 No comments:

Beyond the Kuba in Congo surface design

The embroidered and appliquéd raffia cloths of the Kuba peoples of Congo are very familiar to collectors of African textiles and to all those with an interest in indigenous African design. Remarkable and beautiful though the finest Kuba cloths were, they are only the best known and most easily found of what was once an extensive variety of raffia textiles woven by almost all peoples of the Congo basin. Today it seems likely that only Kuba cloths are still made in Congo and the few non-Kuba examples that occasionally reach the market come mainly from old European collections assembled in the colonial period. The best place to see examples from these other areas is in museum collections, some of which are now accessible on-line. I will have more to say about these in subsequent posts. 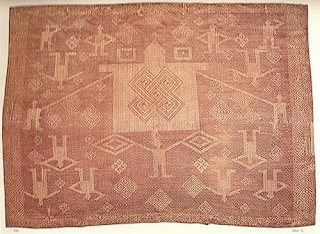 Last week at a small "tribal" art fair here in London I greatly admired an early C20th mat attributed by the dealer to the Mangbetu people. It reminded me to look again at this obscure and unjustly neglected aspect of surface design in Congo. These amazing and exceptionally rare examples are all from the collection of the Royal Museum of Central Africa, Tervuren, Belgium. As yet they are not on-line - these images are scanned from COART, E. La Nattes. Annales du Musée du Congo (1927) 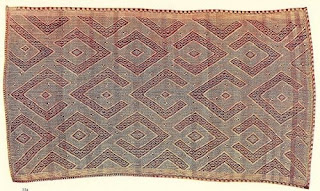 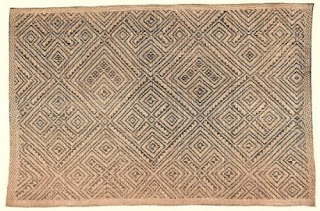 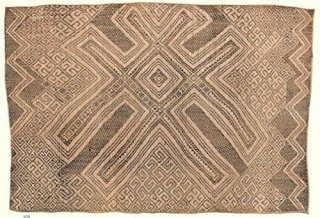 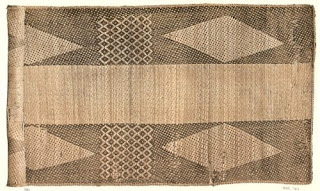 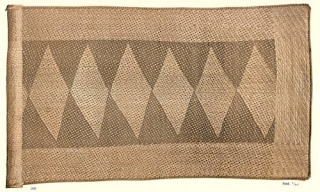 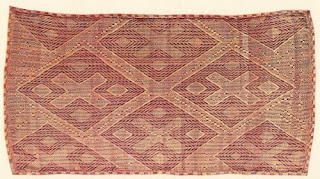 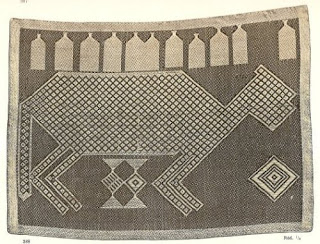 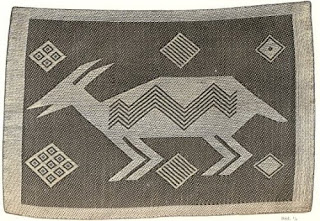 Posted by Duncan Clarke at 03:49 No comments:

A postscript to my Sierra Leone trip

Posted by Duncan Clarke at 02:53 No comments:


After a busy summer of travelling we now have new stock posted throughout our web gallery and available at our London shop. A few highlights are shown below. 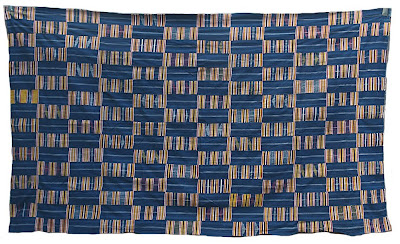 Ewe cloth come from the Volta region of Ghana and bordering areas of Togo. They are among the most sought after vintage African textiles by museums and collectors. Woman wear two small cloths of the same design while men wear one large cloth toga fashion. E503: The slightly narrower than normal strips, together with the threefold grouping of weft faced blocks are an archaic style and indicative of an early C20th or earlier date for this cloth despite its pristine condition. Much African textile design is about exploring the tension between similarity and difference within the self-imposed constraints of the design. In this case the weaver restricts both the weft blocks and weft motifs to a limited palette of red, yellow, white, and blue, but varies the choice of motifs and the order of the weft stripes within the pattern blocks throughout. More Ewe cloths here 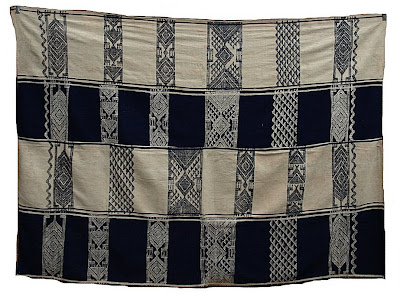 Nigerian Women's Weaving.
Nigerian women used a different type of loom to the man's narrow strip device found throughout West Africa, weaving wider panels of fabric.
NW396: Woven by Ijebu Yoruba women in the town of Ijebu-Ode and its surroundings, these extraordinary cloths are used as insignia of office by Ijebu chiefs and members of a society known as Ogboni (which in the past had responsibilities for the worship of the Earth deity and advised the king.) The designs represent various important spirit familiars including frogs, crocodiles etc. This four panel indigo dyed blue and white type, woven from thick hand spun local cotton is very rare. The right hand panel has at some point been cut near the centre and stitched back together, but otherwise condition is excellent. Dates from circa 1900-20. More Nigerian women's cloths here 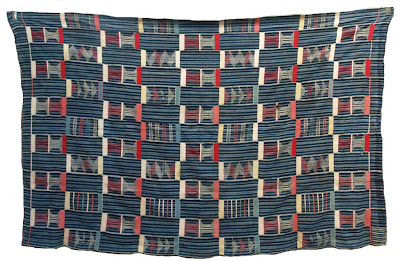 Francophone African Textiles
At the moment we are focussing on Cote D'Ivoire and in particular on obscure and rare cloths from the north east of the country on the border with Ghana. Fr402: One of the finest and most elaborate of the small group of woman's wrapper cloths we have collected from the Bondoukou region. Woven with a hand spun indigo dyed cotton background the design has a regular alternation of weft float motifs framed by red, white, or blue weft faced blocks. Well worn and with one small area of damage to a float pattern - see detail, this exceptional cloth is in good overall condition. Dates from early C20th. More Francophone African cloths here
Posted by Duncan Clarke at 05:36 No comments: