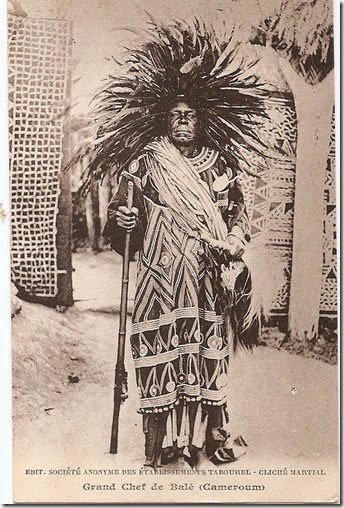 With newly made Cameroon feather hats for sale by the hundred on Ebay and, I noticed this morning, a page on Pinterest devoted to “Juju Hat Decor” it seems like a good time to look at a few old images showing the real thing in the original context of court regalia in the Cameroon grassfields kingdoms of the early C20th. All photos vintage postcards circa 1900-10, author’s collection. 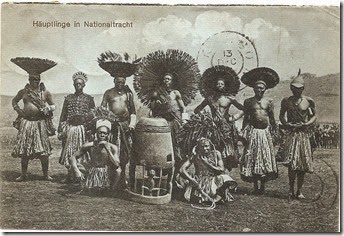 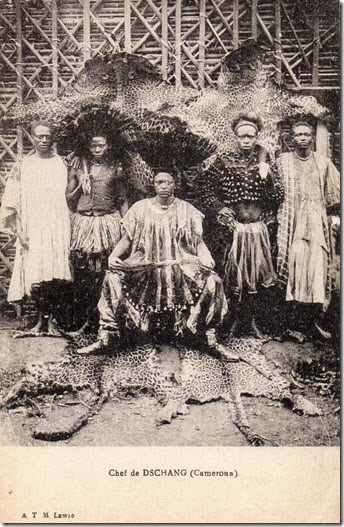 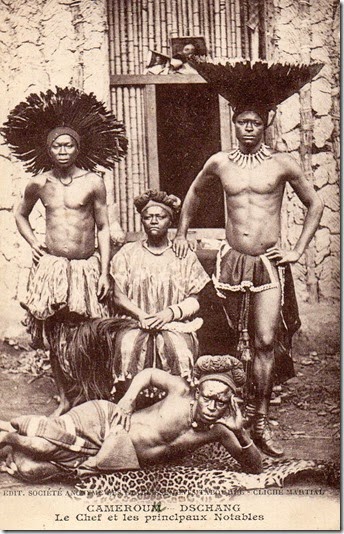 Posted by Duncan Clarke at 03:21 No comments:

Below are a selection of unusual and early robes from the Musee du Quai Branly, Paris.  Their entire collection may be viewed online here. 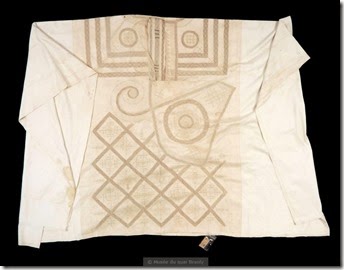 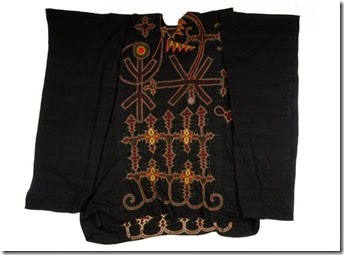 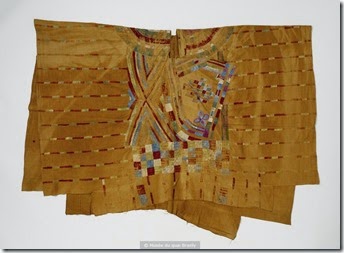 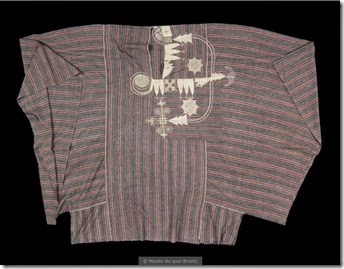 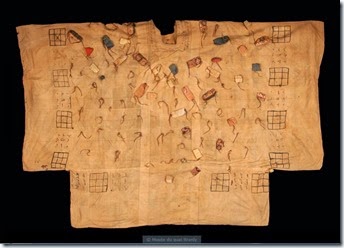 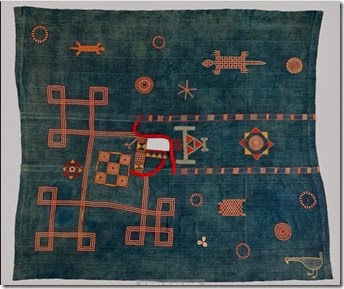 Posted by Duncan Clarke at 04:03 No comments:

Cloth of the month: An Ewe chief’s robe. 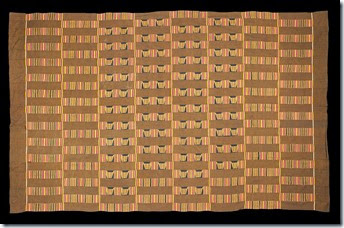 E816 - Superb complete example of a rare style of Ewe chief's cloth. In this style the weaver uses the three weft block layout typical of many early Ewe cloths but extends the length of the pattern blocks and alternates them with adjacent strips. More often than not the weft float motifs on these cloths are as here rather blocky chickens executed in orange thread, suggesting that they are all the work of a single weaver or at least a single workshop. For a more varied but incomplete example see Adler & Barnard African Majesty figure 114. A cloth in the same style in the Museum fur Volkerkunde, Dresden, was accessioned in 1910. On our piece the background cloth combines an orange warp with a black weft. In excellent complete condition. Larger than is typical for Ewe cloths. Dates from circa 1900-30. Measurement: 142 inches x 92 ins, 360cm x 234cm 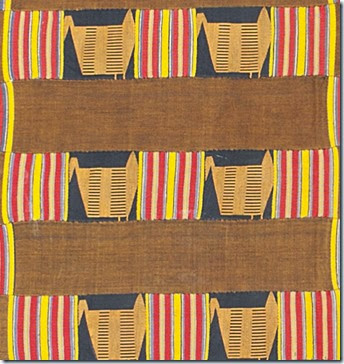 The scanned photos below show the Dresden cloth, which was collected in 1910 by E. Gutschow, who noted: “Kete, country cloth from Keta. This cloth is especially made for rich people. It is artistic work with many designs.” [*] 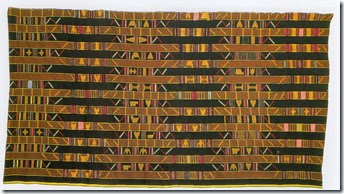 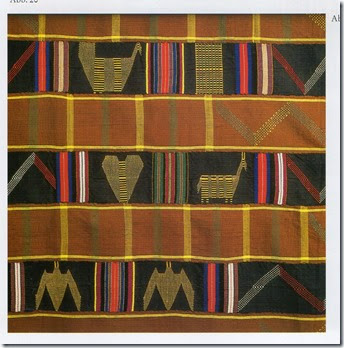 Posted by Duncan Clarke at 03:54 No comments:

Today at the shop 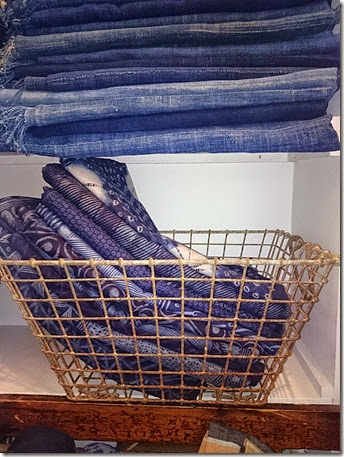 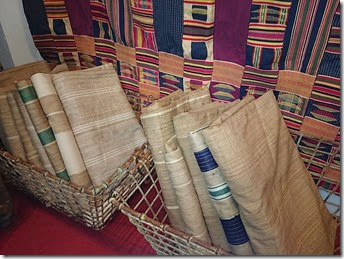 Posted by Duncan Clarke at 04:05 No comments:

“In the present-day Democratic Republic of the Congo, the Kuba peoples are renowned for their cut-pile raffia cloths. When sewn together and layered, they form extraordinary skirts and overskirts that wrap around the body multiple times. Characterized by resplendent surface elaboration, these garments are detailed and complex like other Kuba decorative arts, a feature found in no other African kingdom. Remarkable not only for their beauty but also for their large scale — some of these textiles reach nearly thirty feet in length — they are worn on special occasions by men and women, and display the status of the wearer.

Kuba Textiles: Geometry in Form, Space, and Time is the first exhibition to bring together works from two of the earliest collections of Kuba textiles: the Musée Royal de l’Afrique Centrale, Tervuren, Belgium, founded by Leopold II in 1897, and the Sheppard Collection at Hampton University in Virginia, gathered between 1890 and 1910 by the American Presbyterian Congo missionary, William Henry Sheppard, the first Westerner to be received by a Kuba king in 1892. Additional important loans to the exhibition come from the Brooklyn Museum, the Cleveland Museum of Art, The Metropolitan Museum of Art, and three private collections.

The Kuba collections of the Musée Royal de l’ Afrique Centrale and Hampton University distinguish themselves by their precision in dating and provenance. Kuba textiles of established date are rare but the groundbreaking research from these institutions makes it possible, for the fist time, to establish a foundation for their historical trajectory. Twenty-five skirts and overskirts worn by men and women from all social classes have been selected for Kuba Textiles from these two major collections. By comparing the techniques and styles of early documented textiles to examples collected during the past forty years, one can for the first time, through expert evaluation, not only attempt to establish a chronology for these works but also dispel the notion of a monolithic Kuba style. 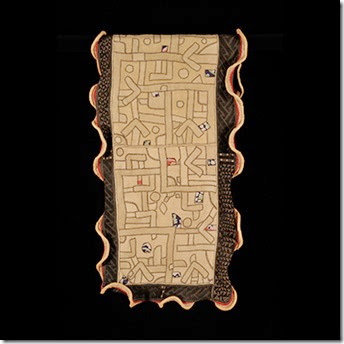 Kuba Textiles considers skirt and overskirt embellishment within the context of Kuba style generally, but unlike other exhibitions that view these works alongside a panoply of Kuba arts, this show considers them alongside directly related objects. The first section of the exhibition features the earliest known wooden sculpture of a seated Kuba king (ndop) from the eighteenth-century, on loan from the Brooklyn Museum. As depicted on the carving, richly embellished accessories will be displayed alongside the carved wooden sculpture. These objects are drawn from the Musée Royal de l’Afrique. The inclusion of a royal sculpture recalls the importance of embroidered textiles among the Kuba peoples since the founder of the kingdom was identified with wearing lavish woven cloth. The second section — the core of the exhibition — displays selected skirts and overskirts, the surfaces of which are entirely covered with embroidered, appliquéd, or tie-dyed patterns displayed in an asymmetrical or irregular way. Amid the textiles there are two small clusters of objects. One of these groupings features postcards and trade cards that illustrate the popularization of Kuba decorated textiles and the splendor of the King’s accoutrements in the early twentieth century until the 1950s. The other cluster displays cosmetic boxes that contained tukula, a powder extracted from a hard wood tree used not only as a cosmetic but also to dye textiles, as well as an ensemble oftukula blocs, known as mbwoong itool, which feature motifs similar to those found on many of the skirts. Made by women, these small-carved blocks, crafted from a camwood paste, were often used in funerary celebrations.

The exhibition concludes by suggesting the influence of Kuba textile design on twentieth century western art and stage design, pairing Kuba textiles with both enlarged facsimile details of a well-known painting by the great Austrian painter, Gustav Klimt (1862-1918), as well as a garment designed by the great German costume designer, Jürgen Rose (b. 1937). In both instances, the painting and the costume borrow from Kuba patterns, share its affinity for the ubiquity of ornamentation, and demonstrate the continuing influence of Kuba design internationally.

Overall, the exhibition features eighty-two works (forty-one textiles and forty-one objects) many of which date from the late nineteenth and early twentieth centuries, and most of them publically exhibited for the first time in Kuba Textiles. The exhibition will be accompanied by a 140-page catalogue, fully illustrated in color. It will contain five scholarly essays by: Dr. Patricia Darish, independent scholar; Dr. Christraud M. Geary, Teel Senior Curator Emerita of African and Oceanic Art, Boston Museum of Fine Arts; Christina Giuntini, Conservator, Department of the Arts of Africa, Oceania and the Americas, The Metropolitan Museum of Art; Dr. Verena Traeger, Lecturer at the Institute of Cultural and Social Anthropology, University of Vienna; and Dr. Julien Volper, Associate Curator, Musée Royal de l’ Afrique Centrale, Tervuren. These essays will provide important, new scholarship on Kuba textile design from historical, technical, and contextual perspectives, based primarily on archival documents.

Generous support for the exhibition Kuba Textiles: Geometry in Form, Space, and Timehas been provided by The Coby Foundation, LTD, The National Endowment for the Arts, The New York State Council on the Arts, and ArtsWestchester, with support from the Westchester County Government, and Elisabeth and Bob Wilmers. Additional support is provided by Members of the African Arts Council, the Friends of the Neuberger Museum of Art, and the Purchase College Foundation.”

Visit the site of the Neuberger Museum of Art.

Posted by Duncan Clarke at 02:37 No comments: