I made a brief first visit last week to Freetown, Sierra Leone. I didn't really expect to find any old cloths straight away so was not too disappointed when all that was to be seen at the market was rather badly woven and unappealing new blankets. Freetown itself was peaceful and interesting, with a spectacular setting and a great beach. These images are the first of a couple of posts this week to mark the trip, reminding myself at least of the great textile traditions of the past.... 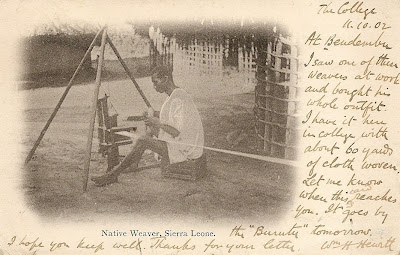 This card, postmarked 1902, shows the distinctive tripod mounted loom unique to Sierra Leone and neighboring areas of Guinea and Liberia. The sender of the card writes " I saw one of these weavers at work and bought his whole outfit. I have it here at College with about 60 yards of cloth woven." 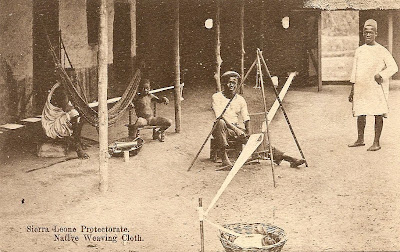 Another early C20th card, by the noted Creole photographer W.S. Johnson, shows the full length of warp which the weaver moves along with his tripod mounted apparatus as weaving proceeds. Note the second, partially completed, warp, behind the hammock.

The finished cloth, from the Beving Collection at the British Museum, a thick handspun cotton "country cloth" called kpoikpoi. This famous cloth, which was featured in the last years Metropolitan Museum textile exhibit can be found on-line in the "Search the Collections" section of the British Museum site here by entering the reference number Af1934,0307.179
Posted by Duncan Clarke at 09:20 No comments: 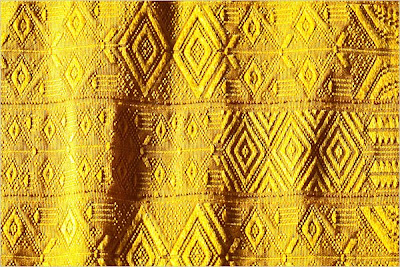 Now on display at the American Museum of Natural History, New York, is a unique and remarkable Malagasy cloth woven from the silk of the golden orb spider. The project, organized by Simon Peers, the British art historian behind a long running project to sustain and rediscover the finest traditions of Malagasy silk weaving, took years of experimentation and, apparently, the output of over a million spiders. Details here
Posted by Duncan Clarke at 00:41 No comments: 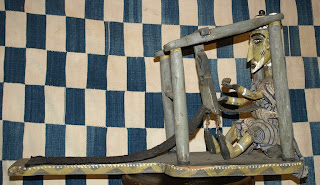 Bamana puppet of a weaver.

The Sogo bo (literally "the animals come out") puppet theatre tradition of the Bamana people of Mali embraces a huge range of characters and performance styles, from larger than life animal masquerades animated by several men, to small string puppets. Inspired by a visit I made to a puppet festival in Markala, Mali last year I asked if there were any puppet depictions of weavers. Recently I received these two charming sculptures which now decorate my shop. 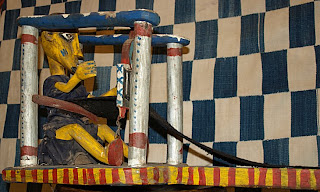 Another puppet by the same sculptor.
Both these puppets are the work of a man known as Dina Ballo from the village of Zambougou, whose is said to be the only Sogo bo sculptor who makes weavers. Sculptural depictions of weavers are surprisingly rare despite the activity being an everyday sight in many parts of West Africa. Looking through my library I found only two further examples, shown below. 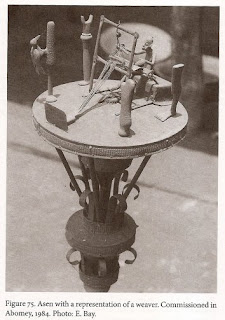 An asen is an ancestral altar from southern part of the Benin Republic. This image is taken from the recent and excellent book Asen, Ancestors, and Vodun by Edna G. Bay (University of Illinois Press, 2008) 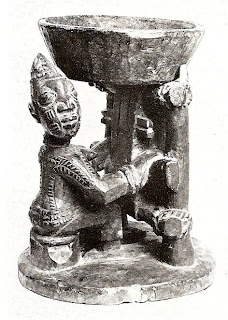 Posted by Duncan Clarke at 05:22 No comments:

Interesting post at www.yatzer.com "M'Afrique" by Moroso here
Posted by Duncan Clarke at 03:32 No comments: 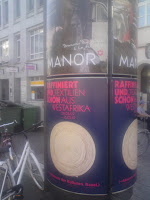 The exhibition is displayed over three floors in an annex of the Museum der Kulturen in the medievel old centre of Basel. The main museum buildings are currently closed for a major restructuring designed by Basel's star architects Herzog & de Meuron. The bulk of the exhibition is made up of three large galleries, the first devoted to mainly to Ghana and Cote D'Ivoire, the second to Mali, and the third to Nigeria. In each the complete cloths are fully visible, without glass, hung either on the walls or on central panels. This allows the visitor both to take in the full visual impact of each cloth and to move as close as desired in order to examine pattern details or weave structures. Highlights of the ground floor gallery are the museum's three C19th Ghanaian cloths including one presented to a Basel missionary by the King of Akropong in 1840 that is the earliest documented "kente." Selections from the museum's comprehensive collection of Fulani kaasa and arkilla blankets, along with a modern figurative "couverture personnage" by Oumar Bocoum made up the Malian section on the first floor. The final main gallery showed an interesting range of Nigerian textiles from two rare C19th magenta silk "alaari" wrappers to a shiny rayon shawl woven in Okene early in the C21st. Smaller galleries explained the techniques and materials used in making African textiles, as did a short video that included rare footage of a single-heddle Cameroon ground loom in action. Captions and texts throughout were in English as well as French and German.
Posted by Duncan Clarke at 03:26 No comments:

A brief round-up of recent European publications on sub-Saharan African textiles. A later post will cover recent books on African fashion. French Africanist booksellers Soumbala (www.soumbala.com) are a good source for most of these.

Posted by Duncan Clarke at 05:36 No comments: 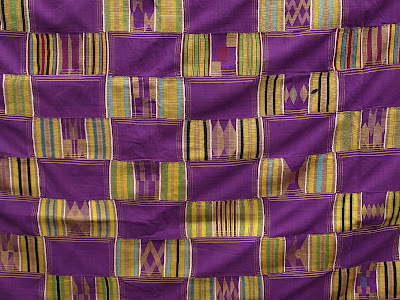 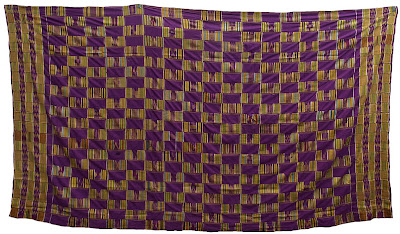 K201: Rare Asante silk man's kente cloth for ceremonial wear, circa 1920-30s, in the pattern known as "liar's cloth" or in Twi "nkontompo n'tama." As with all Asante kente the cloth is named after the background design. On a "liar's cloth" three narrow warp stripes run along one selvedge of each cloth strip and at regular intervals, cross the strip as a weft, before continuing along the strip as warp stripes at the other edge. The technique used to create this effect is unique to Asante weaving and to day known only to a few master weavers. It involves keeping each of the three small groups of warp threads used to create the three alternating stripes at a different length and tension to the main body of the warp using a set of small wax ball weights which are hooked onto the threads and hang below the warp as it is woven. These allow the weaver to manipulate them independently as he completes the strip. "Liar's cloth" is rare and among the most sought after of Asante textiles, and this fine albeit rather worn, silk example has a good variety of neatly woven supplementary weft motifs. To view this and other vintage Asante kente cloths in our inventory click here

Posted by Duncan Clarke at 03:28 No comments: 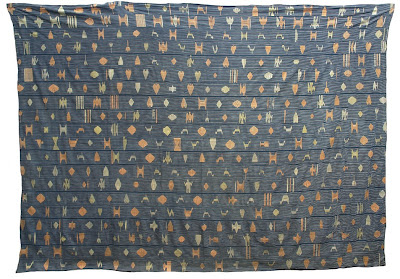 This is the first of a series of posts over the next week or so that will highlight selected new acquisitions that are now available in our London gallery or through the website.These are exceptional museum quality pieces and are priced accordingly, but we also carry an extensive collection of more modest but still rare and beautiful fabrics.

Ewe500: this unique and remarkable cotton cloth would have been commissioned from an Ewe master weaver in the Volta region of Ghana by a wealthy chief or other prominent man in order to display great wealth on an important ceremonial occasion. Dating from around 1930 to 40s, it has over 400 distinct motifs executed using the supplementary weft float technique, including people, animals, birds, fish etc. These motifs are time consuming and therefore expensive to weave and are usually spaced out quite sparingly between weft faced bands on the woven strips that make up the cloth. An example such as this one where the design is totally composed of the motifs is very rare. In sewing up the cloth the weaver has varied the placement of the narrow plain band at one selvedge of each strip to create visual interest in the pinstriped background.
To view other vintage Ewe cloths from our inventory click here

Posted by Duncan Clarke at 03:12 No comments: 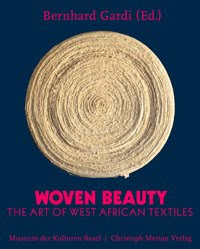 The exhibition catalogue of the Basle show is now available in English and German editions. It can be ordered direct from the publishers here or from the museum shop here.There is also a website to accompany the exhibit here.

Edited by Bernhard Gardi the catalogue makes some of his many years of research on Malian textiles and Kerstin Bauer's work on the Dyula of northern Cote D'Ivoire available in English for the first time. It also includes articles and shorter texts by John Picton, Jean Borgatti, Malika Kraamer, Kolado Cisse,Rogier Bedaux and Annette Schmidt and a short chapter on Nigeria by myself. Colour photos show groups of related cloths from several regions.


This is a significant contribution to the field of African textile studies which every collector and scholar with an interest in African arts should buy !

Posted by Duncan Clarke at 06:32 No comments: