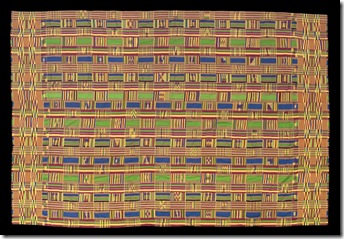 K224 - A superb silk man's kente with six different warp striped patterns and a fine variety of supplementery weft float designs. Cloths with mixed pattern strips were called "Mmaban", meaning mixed, but each warp stripe pattern had it's own name. 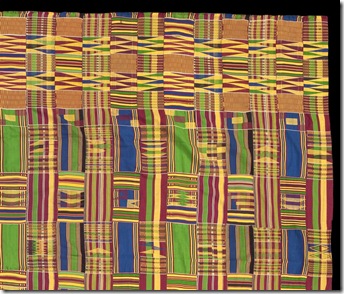 The second and sixth strips appear to be variants of a design that Rattray (1927:241) calls "Asonawo mmada" - "The clan tartan of the Asona tribe; the father of King Bonsu Panyin was Owusu Ansa, who belonged to the Asona clan, the first of that clan ever to be the father of an Ashanti king. The pattern is said to have originated in this fact." The third strip is called "Oyoko ne Dako" - the Oyoko and Dako clans (Rattray 1927:239) after two rival clans in the royal matrilineage who fought a civil war in the early C18th. Strip four is unidentified. Strip five is called "Mamponhemaa" - Queen mother of Mampon (Ross 1998:113). 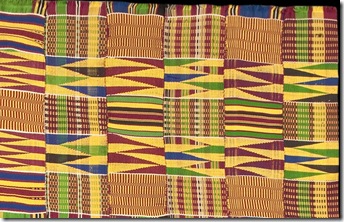 Although mixed strip rayon cloths are fairly common a silk example of this quality is extremely unusual and would most likely have been commissioned for a king or senior chief in the early decades of the C20th. Condition is excellent. 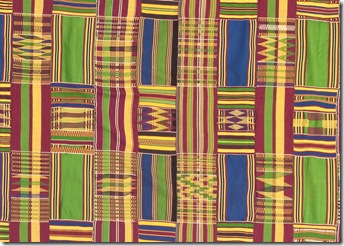 For size, price, etcetera please visit our gallery of Asante kente here. Click on the photos above to enlarge.