Cloth of the Month: A Fante Asafo Frankaa 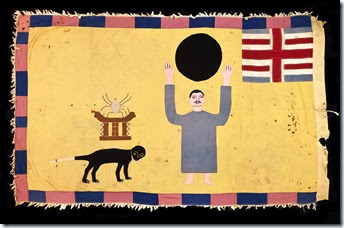 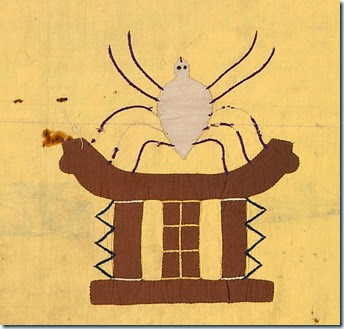 Ananse (Anansi) is a key god in the religious mythology of the Akan peoples of Ghana (including the Fante) and related diaspora groups.  He is typically represented, as here, by a spider, the literal translation of the word ananse in the Akan language. Here he is associated with the wisdom and cunning of the gods and by virtue of the depiction seated on a chiefly stool, is claiming that wisdom for the chief. In Akan culture the stool is closely associated with the identity and persona of its owner during his life, and in many cases after the owners death his stool would be painted white and preserved as a focus of libations to the deceased ancestor  in an ancestral “stool room.” It is also the key embodiment of royal and chiefly identity and of royal regalia.

The most interesting feature of this flag is the way in which a specifically local Akan set of iconographic features is combined with other imagery apparently of a more global origin. Below the spider on it’s throne we see a crawling monkey like figure.

The function of this image in the interpretation of the flag remains obscure but in their caption to a very similar flag by the same artist, shown below, Adler and Barnard in their book Asafo ! African Flags of the Fante (Thames and Hudson, 1992, figure 42) suggest that the image is drawn from a popular print based on William Blake’s classic representation of King Nebuchadnezzar. 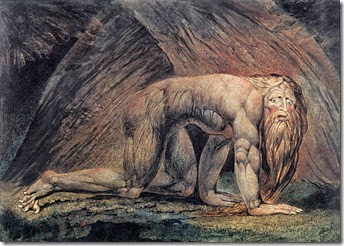 This is certainly an intriguing idea, and anyone who has listened to the radio in Ghana would not under estimate the extent of reference to even more obscure biblical figures, but I would be curious to see the source of this link in a popular print. 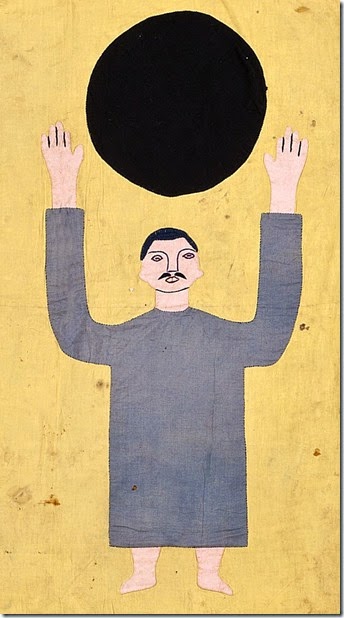 By the same token the depiction of the figure holding up the world may perhaps be drawn from a print depiction of Greek god Atlas.

What are we to make of the similarity between our flag and the one in the Adler collection, below ? 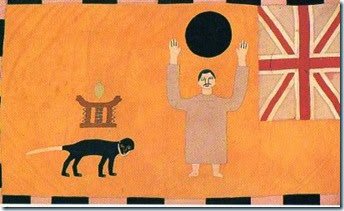 Each flag artist developed a personal style within the overall expectation set by the format. Several of these artists were identified and discussed in the earliest published research on the tradition by Doran Ross in his small book: Fighting with Art: Appliqued Flags of the Fante Asafo (UCLA, 1979) from which most subsequently published information has been drawn. Close attention to genuine flags allows one to identify individual styles and hands, and within that it was not unusual for an artist to repeat a design that either he or his patrons felt had been particularly successful and admired.

Click on the photos to enlarge. Click here to visit our updated gallery of Asafo flags for sale.