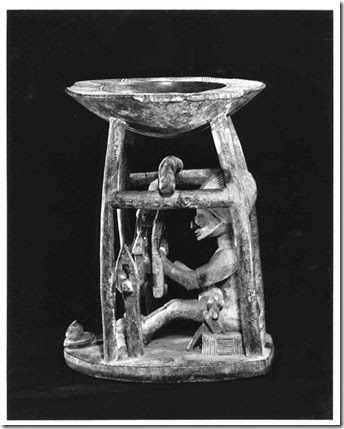 A few months ago I posted a photo of this unusual object I had noticed pictured in a dealer’s advertisement in an early issue of African Arts magazine. As I noted at the time depictions of any form of artistic activity are extremely rare in Yoruba ritual sculpture and I know of only one other depiction of a weaver –  another Ifa diviner’s bowl, that one showing a woman weaving on a vertical loom, in the Ethnographic Museum in Berlin. I have now found the bowl listed in the collection of the University of Pennsylvania Museum of Archaeology and Anthropology, online here, from which these three photographs are taken. 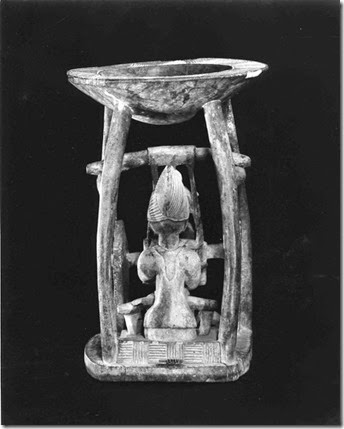 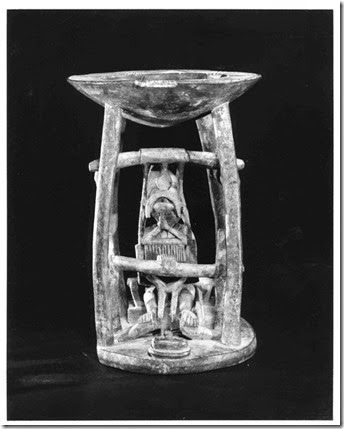 As these photos show it is a surprisingly accurate depiction of a Yoruba aso oke weaver at work. Note that it is miscataloged as a “kola nut presentation bowl” – actually it is in the standard form of bowl’s once used by Yoruba Ifa diviners, babalawo, as a prestige holder for the 16 sacred palm nuts that they used to cast divination signs.

Incidentally, the same museum has some very early and interesting West African textiles in it’s collection, many of which may now be viewed online. I will be discussing some of these in  future posts.