Yoruba asooke in the Gold Coast, circa 1900 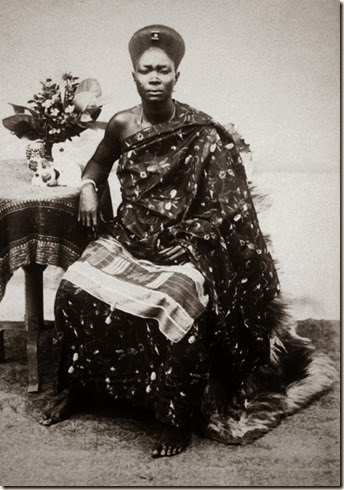 This photograph from the Basel Mission archive shows a wife of the King of Accra. She is dressed in the fashionable style of the day, with a typical high swept hairstyle, and most likely would have been of Ga ethnicity.   Although the description only notes that it dates to “before 1917” it appears earlier and more likely around 1900.  Aside from being a fine image it interests me because it provides a rare early glimpse of Yoruba asooke cloth in use in the Gold Coast. Folded across her lap is a shawl in a classic Yoruba strip weave design of the late C19th, similar to the example from our gallery shown below.

From the later decades of the C19th until the 1960s Ghana provided a large and important market for Yoruba weavers. Growing numbers of Yoruba people settled in the Gold Coast (most were expelled from the then independent Ghana in 1969) and traders from the Oyo Yoruba town of Ogbomoso dominated the export trade in asooke. Much of the cloth was woven to order, with traders gathering sufficient orders then walking back to their home region to organise the weaving of  the cloth, either in Ogbomoso or in the larger weaving towns nearby such as Iseyin,  Ilorin and Oyo. In the early decades of the twentieth century many of these traders used bicycles, packing a large bundle of cloth on the saddle then pushing it several hundred miles back to the north of Ghana.

Although locally woven cloth and cloth traded from elsewhere in the country was of course available throughout Ghana from Asante, Ewe, and other weavers, the imported varieties from Nigeria offered an alternative that at least in the case of more expensive examples using silk from the trans-Saharan trade, was highly valued. Our photograph provides a rare visual proof of this high status. Posing for a portrait photograph was a rare and important event at that period, and every detail of the sitter’s appearance and outfit would have been carefully selected. For a high status woman such as the wife of a king to display an asooke shawl so prominently in the photograph clearly indicates that it was a prized and prestigious possession. 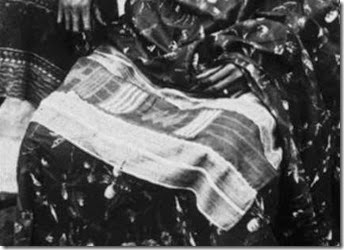