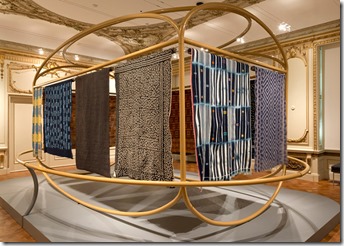 ABOUT DAVID ADJAYE SELECTS: WORKS FROM THE PERMANENT COLLECTION

“Architect David Adjaye presents 14 West and Central African textiles from the museum’s permanent collection in the latest installment of the Selects series. On view in the renovated Marks Gallery on the museum’s first floor, the exhibition is the 12th in the ongoing series, in which prominent designers, artists and architects are invited to mine and interpret the museum’s collection.

Hailed as an architect with an artist’s sensibility and with projects underway on four continents, Adjaye is known for combining the aesthetics of his African heritage with classic, modernist design. In exploring Cooper Hewitt’s collection, he has created a dialogue between the museum’s textiles and his own “library of patterns” that he draws on as a source of inspiration in his work. Having lived in Africa as a child and visited each of the continent’s 54 nations as an adult, Adjaye is deeply affected by the importance of textiles in the visual culture of Africa, whose forms and patterns are often reflected in his buildings.”

More information and a link to download the brochure here.

Do get the  brochure and read Adjaye’s comments which are rather more interesting the the textiles on display – with the exception of the Ewe on the brochure cover they are pretty mundane pieces.