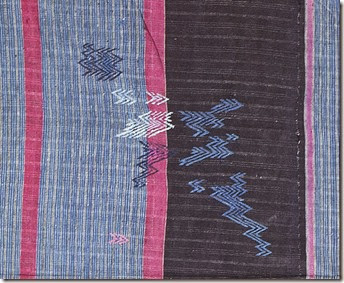 Amongst the Yoruba and other Nigerian peoples embroidery was not a domestic pastime but a  professional skill exercised by full or part-time male craftsmen, most if not all of whom were Muslim. Perhaps as a result the technique was applied only in specific contexts, notably in the decoration of male ceremonial robes and trousers. Recognised patterns were handed on from one generation to the next,often in Koranic schools, and although designs could be modified over time and n0vel variations introduced, these took place within an established repertoire and context. This repertoire was based to a large extent on Islamic inspired motifs shared, with local variants, across a wide area of West Africa.

In addition to its intrinsic beauty, the cloth we are looking at today is notable as an exceptional example of Yoruba embroidery in an unexpected context and in an otherwise unfamiliar style. As this is the only known example to date we cannot know whether it represents a unique and idiosyncratic innovation or whether its use was once more widespread. 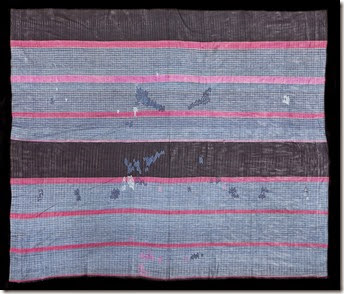 The cloth ( click on the photo to enlarge) is a woman’s ceremonial wrapper cloth, woven by a woman weaver using a vertical single heddle loom, in two panels joined horizontally at the centre. It is woven  from quite fine hand spun indigo dyed cotton and pink, probably cochineal dyed, silk from the trans-Saharan caravan trade. Comparison with related cloths in museum collections, and the use of silk, allow it to be dated to around the end of the nineteenth century or the early years of the twentieth. Quite unusually for this type of cloth the use of a repeated pattern of stripes in the weft, partially but not entirely hidden by the predominance of the warp, allows for a subtle check effect in the paler blue areas. The use of silk, along with the sophistication of the weaving and the fineness of the thread, tell us that this was a prestige piece commissioned at considerable expense, for the use of a high status patron.

The embroidery using the same pink silk as the ground cloth, along with three shades of indigo dyed cotton, is in the form of repeated clusters of zigzags of various lengths. The layout of embroidery contrasts in colour with the background and the placement seems most focussed on the area of the cloth that would be visible in use. The similarity in the colours chosen, in particular the rather unusual shade of pink, suggests the embroidery was done quite soon after the cloth was woven.

Why might a wealthy Yoruba woman at the turn of the nineteenth century choose to have zigzags woven on her expensive wrapper cloth ? We can only speculate based on the association of zigzag designs in other contexts in Yoruba visual culture. 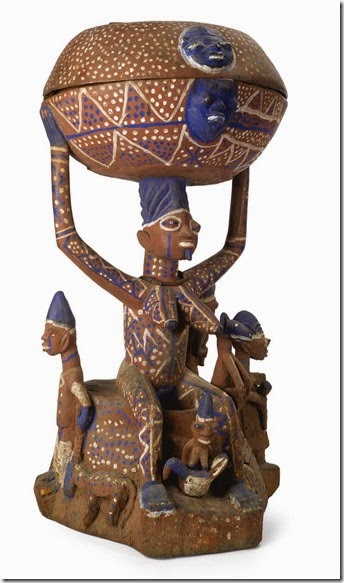 The sculpture above [source IMO DARA on Pinterest], called an arugba Sango, is a bowl supported by a cluster of figures, dominated by a female devotee. It would have formed part of the cult paraphernalia of the Yoruba  orisa (deity), Shango,  god of thunder and lightning, and have contained the collection of Neolithic stone axe heads that were believed to be the physical embodiment of thunderbolts. The zigzag designs painted on both the bowl and the female figure depict the power of Shango in its manifestation as thunder and lightning.

Female devotees played a prominent role in the cult of Shango and I would suggest that the reiteration of the motif on our cloth is most likely an indicator that it was owned and worn by a high status woman who was an important follower of the Yoruba thunder deity.

The cloth is now in a UK private collection. To view some of our current stock of Nigerian women’s weave textiles click here.