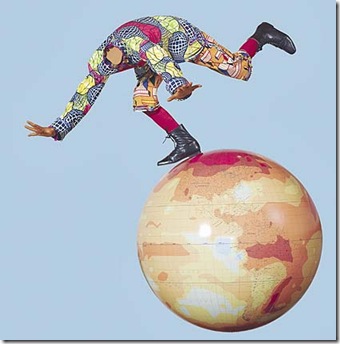 “Exhibition: COTTON: Global Threads, Whitworth Art Gallery, Manchester, until May 13 2012
Four years ago, curator Jennifer Harris and her team at the Whitworth were mooting ideas for a new exhibition that would feature as part of the London 2012 Cultural Olympiad’s Stories of the World programme.
Cotton: Global Threads, which offers a social rather than historical account of the cotton industry and looks to place the textile in its social context, is the product of that first meeting four years ago.
Why cotton? Harris explains that when looking for a global story she also wanted something that had relevance to the region. As Lancashire was a major producer of cotton for the worldwide market during the 18th and 19th centuries, it seemed the perfect choice.
A major part of the display is the culmination of a three-year collaboration between the gallery and local students intended aimed at engaging them in textile work.
Visitors are encouraged to make use of a dressing room to try on the clothes created by the students, who “upcycled” charity shop finds by adding material they designed and printed.
The project also resulted in the students winning a grant to be sent to Ahmedabad, in India, to see cotton production first-hand.
Photographs of prints and landscapes from their trip have been lasered onto building blocks to create ‘Cottonopolis’ city, a sculpture also featured.
Other artists on display at Cotton: Global Threads include Yinka Shonibare and Lubaina Himid, who created pieces specially commissioned for the exhibition.
Himid’s kangas – pieces of printed cotton fabric featuring images and slogans, worn in West Africa, were based on designs she found in the Whitworth’s textile collection as well as through her own research and imagination.
Each kanga is presented with a photo collage made by the artist – her vision of the intended wearer of her design.
Presented in varying sized pieces to look as though they have been “discovered”, walking through Himid’s display is like rifling through the “lost scrapbook” she hoped to create.
Himid is a natural fit for the exhibition. Hailing from Zanzibar, she understands and encapsulates its theme perfectly, exploring the connection between people and their owned objects.
Harris says artists were given the freedom to engage with the theme as they saw fit. She did not seek out textile artists who simply used cotton, but people who had something to say about it.
One such example is Grace Ndiritu’s Still Life. Rather than setting out to make a film about textile, Ndiritu actually conceived Still Life while travelling through Mali with members of a nomadic tribe to make a film about responsible tourism.
Seeing how material was something that the tribe “live and breathe”, textile became a part of her “video paintings”, acting as a sister set to the original.
West African cotton is used in a physical performance by the artist to camera as Ndiritu wraps, conceals and reveals her body as she aims to provoke a differing set of responses from the viewer.
Shown in a completely dark room offset from the main gallery, the result is truly captivating.
Aboubakar Fofana, who was born in the region and is passionate about maintaining its cultural heritage, also seeks out Mali’s remaining textile masters to learn ancient African weaving and dyeing techniques.
He innovates these traditions by producing an installation piece, Les Arbres à Bleus – a forest of cotton trees made from organic fibres coloured using the nearly-lost Malian tradition of natural indigo and vegetable dyeing.
His choice to place trees at the subject of the piece reflects their central importance to his native Bambara ethnicity.
Considered as a symbol of life, Fofana says he also personally engages with the way that trees, like human beings, are all unique.
“They have their own DNA” he explains. Each sculpture in his forest is completely different and stands alone as distinct.
While the gallery blinds usually remain drawn to protect the work on display, Fofana has opted to leave them open, allowing the natural light to showcase his piece.
It also allows a view outside to the park surrounding the gallery, uniting the trees of Mali with Manchester ones.
Liz Rideal also uses the outside world, with her film, Drop Sari, projected on to the exterior of the building each night.
The piece, which can also be viewed inside the exhibition, is a series of shots of sari textile taken while in India.
With each rapid flash of sari a new set of colours emerge and, in response, LEDs illuminate the building in matching colour, heightening its effect.
Lying on the busiest bus route in Europe, the gallery hopes this spectacle will add a performative element that can be enjoyed by the passing city.
Even though the entire ground floor of the gallery has been given over to the exhibition, Harris expresses frustration at still not being able to fully cover the wide-ranging issues the production and consumption of cotton raises.
She calls it a “microcosm of the globalising world” which “stands for modernisation”.
With this is in mind, the ethical sins of the industry come in a display of high street pieces emblazoned with messages about issues such as child labour and pesticide usage in crop production.
Using a wide range of artistic practice, drawing on cultures from across the world and delving into different historical time periods, Cotton: Global Threads encompasses the many different facets of cotton as a personal, as well as economic, commodity.
Every piece in the exhibition has clearly been carefully considered, not just for its aesthetic value but for what it can add to the surrounding debate.
“These are big issues which are hard to tackle in an art gallery,” reflects Harris. “But I think with we have succeeded with Global Threads”.” 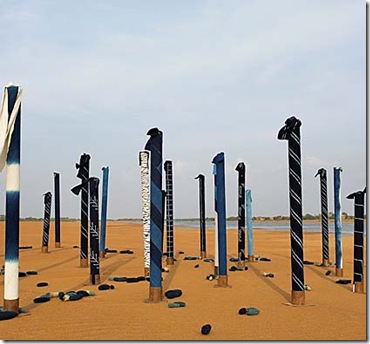