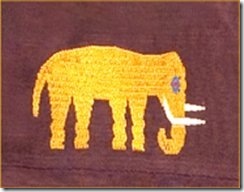 Elephant design from a fine 1960s example of a  distinctive style of Ewe cloth woven from rayon with a large variety of figurative and geometric supplementary weft float motifs on a plain background.  Motifs on this chief’s ceremonial robe cloth include animals, insects, birds, umbrellas, airplanes, forks, stools, leaves etc. 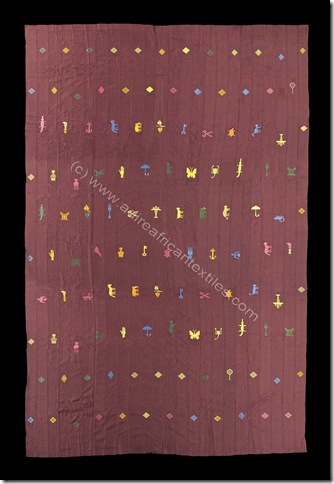 Unlike the designs on most Ewe cloths, the supplementary weft float motifs on this cloth and others of the same type are not identical on both faces of the fabric. Instead the full design appears on the front and only an outline on the reverse. This is because, rather than using the second set of heddles that group warps in sets of 6 or 8 threads  to create the float motifs (so the extra weft goes over 8 warps then under 8 warps etc) the weavers pick out the design by hand, moving the weft over 8 then just under one...

According to Malika Kraamer in her PhD thesis, this technique, which was developed by coastal Ewe weavers in the early decades of the C20th, is called "asidanuvo," meaning cloth with hand picked design. In the 1970s large numbers of rayon cloths with simpler, slightly larger motifs in this style were sold for export to Congo, with the result that the style became called Congo cloth by Ewe weavers. 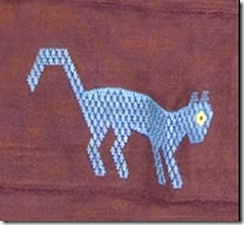 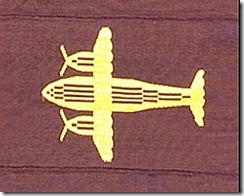 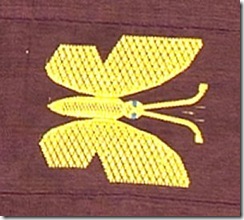 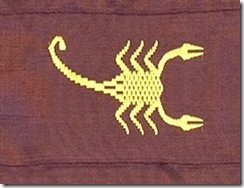 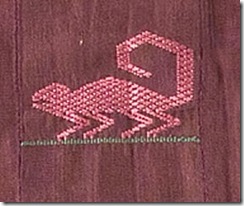 This is an exceptional example, probably dating from around 1960, and in excellent condition. Details, size etc, and more Ewe textiles in our gallery here