Asante kente “adwinasa” and some thoughts on our kente archive 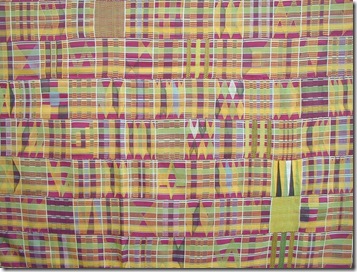 I have now posted online our archive of photographs of Asante kente cloths we have sold over the past ten years or so. Comprising 175 images it can be viewed here. To mark this event here is a brief article written by me about one of the finest of these pieces, the Asante silk “adwinasa” man’s cloth shown here, that was published as a “Benchmark” in Hali #160 Summer 2009. Hali is now devoting an increasing amount of space to African and Indonesian textiles – issue #160 also includes a “market report” on African textiles – subscription and single copies available here. 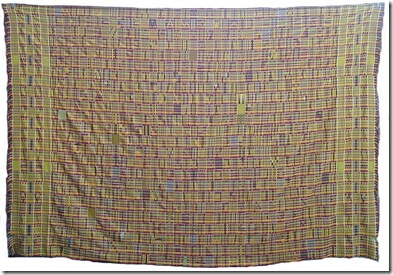 Silk and gold were the attributes of power in the Asante kingdom, an expansionary state that dominated present day Ghana from around 1700 until its defeat in a series of wars with the British in the late nineteenth century. When the British envoy Thomas Bowdich visited the capital at Kumase in 1817 he marvelled at the splendour and wealth displayed by the Asante court. In his account Mission from Cape Coast to Ashantee he noted “The caboceers, as did their superior captains and attendants, wore Ashantee cloths of extravagant price….They were of incredible size and weight, and thrown over the shoulder exactly like a Roman toga; a small silk fillet generally encircled their temples, and massive gold necklaces, intricately wrought, suspended Moorish charms.”

The Asantehene, the king of the Asante at Kumase, is at the head of a complex hierarchy made up of lesser kings, chiefs, and rulers of formerly subject peoples, each of which replicates aspects of the Asante court ritual and regalia, on a lesser scale. Although anyone who can afford it can wear a kente cloth the very finest examples were woven at the order of great kings and wealthy chiefs. For a man of lower rank to wear a cloth that outshone in novelty or complexity that of his superiors was, and still is, an act of lèse majesté that could have serious consequences.

As part of the regalia of office, the property of the “stool” in local terms, the presumption was that these great cloths were to be passed on to successors rather than sold. Enhancing, rather than reducing, the wealth and splendour of the stool was among the major responsibilities of any officeholder and as a consequence it is particularly hard to collect top quality Asante textiles. The cloth we are considering here was one of a small group assembled in the 1970s by a Ghanaian dealer who discovered that the key to securing access to these courts and their treasures was a ready supply of old brass bedsteads he shipped over from England. It remained in a London private collection until a few years ago when it was purchased and donated to the British Museum, which perhaps surprisingly given the long history of British contacts with the Asante lacked a kente cloth of this type and quality.

So why is this piece so exceptional? The background pattern type is not particularly unusual. Asante cloths are named after the colour and arrangement of the warp stripes, in this case the layout of a broad yellow and green stripe with narrow white stripes on a red ground was called “Oyokoman amponhema.” It is a variation of the more common “Oyokoman” that alludes to the Oyoko matrilineage of the Asante royal dynasty, while the Mamponhemaa is the Queen Mother of Mampon, an important subordinate kingdom. Asante weavers use a second pair of heddles to weave weft faced blocks and supplementary weft float motifs on the warp faced background strip. Here the entire surface area of the cloth is covered by a vast array of different weft float motifs framed by more regular border areas. This style of cloth, which seems to have been woven only on Oyokoman patterned backgrounds, is called adwinasa, meaning “fullness of ornament,” or alternatively adweneasa, meaning, “my skill is exhausted.”

On most kente there is a design interplay between the areas covered by weft motifs and the undecorated warp striped background. On the finest old silk examples tightly woven clusters of supplementary weft designs shine out like jewels from the more subdued colours of the background cloth. An adwinasa cloth, the ultimate text of a master weaver’s skill, lacks this contrast and in consequence, to my eyes at least, most examples look relatively flat and lifeless. Here though the master weaver has been able to surpass the constraints of the form and impart a lively vitality to the cloth, primarily by making only very limited use of the more densely woven “double weave” weft motifs to provide an irregular scattering of blocks of intense colour that draws in the eye to the great variety of the more subtle patterns.” 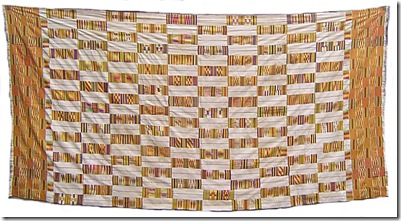 Returning to the archive of Asante cloths, one thought in particular strikes me, especially in comparison to the archive of Ewe cloths we posted the previous week. Pleasing though many of the cloths are, I note how few very top quality Asante silk cloths I was able to collect since the mid 1990s. The same relative paucity of really superb Asante pieces was apparent last month when I had the opportunity to look through a published collection of Ghanaian cloths here in London that was assembled mainly in the 1980s. 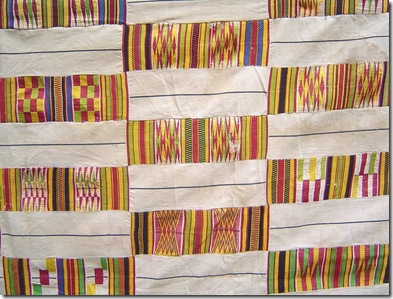 Top quality silk Asante cloths had densely woven blocks of weft design on a smaller, tighter, scale than more mundane pieces, creating a jewel like impact. Almost all would have been woven to order by weavers under court patronage rather than generally available to any man or woman rich enough to buy one, as was the case among the Ewe. However as the large collections of Asante gold jewellery assembled in recent years testify the inalienability of court regalia was more theoretical than actual. Some have no doubt been retained by local courts, while other would have decayed in poor storage conditions. However I would suggest that the most likely reason for their extreme rarity is that very few of these top quality cloths were actually produced, in contrast to the large number of more everyday pieces. Sadly, despite the wide interest in kente there has yet to be a detailed and extended piece of published field research on Asante weavers so we have no way of knowing how much time weavers spent on court orders, what the range of cloths was that different weavers produced and related questions. It seems to me likely that the collections assembled by Brigitte Menzel and Venice Lamb in the late 1960s and early 1970s actually encompass quite a significant proportion of the surviving examples. In a later post I will return to these two important collections and look at their accessibility both in print and online.