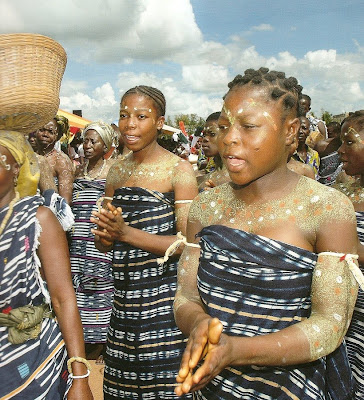 Côte D’Ivoire is home to a fascinating diversity of textile production traditions, the vast majority of which have hardly begun to be researched. Aside from the tie dyed raffia cloths of the Dida people, most of which incidentally are actually very newly made for export sale, the collectors' market has paid little attention to Ivoirian fabrics. Over the past decade the Civil War and the uneasy peace in a divided country that has followed have made further research difficult or impossible. For this reason I was very interested in the glimpses of contemporary cloth production and use provided by the photos and short texts in a newly published book. Somewhat misleadingly titled "Arts au feminin en Côte D’Ivoire", edited by Philippe Delanne, (le cherche midi, Paris, 2009) this is a glossy government endorsed survey subsidised by the UNFPA. Alongside printed fabrics it shows people at celebrations and events wearing a wide variety of locally woven cloths. By the far the most widely illustrated are modern Baule ikat dyed cloths as shown in the first photo. 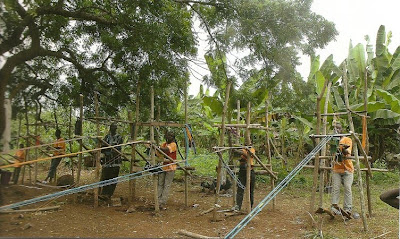 The Baule are an Akan people who migrated to their present location in central Côte D’Ivoire from Ghana in the C16th but seem only to have learnt weaving from their Dioula neighbours in the early to mid C20th. Note the standing posture of the weavers in the photo, unlike the seated style of the Asante and Ewe in Ghana. The book notes that there are around 300 weavers in a cooperative group in the village of Bomizambo 45km from Yamoussoukro. 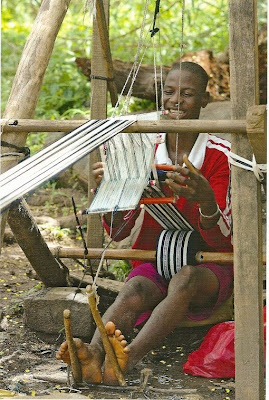 In contrast to the Baule, the weaving of the Dan people in the central western part of the country is very obscure. Perhaps surprisingly given the attention paid to Dan masks and sculpture I am not aware of any published images before this that show Dan textiles and weaving. 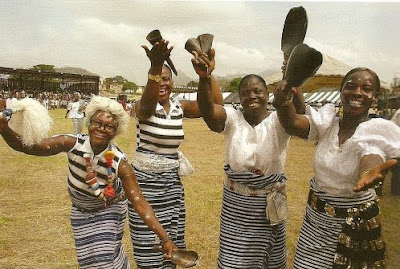 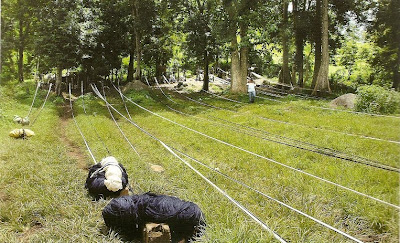 Some modern Gouro cloths worn for a wedding. The lady in the centre is wearing a Baule cloth, but the woman at the left and 2nd from right wear complex weft float decorated Gouro fabrics. 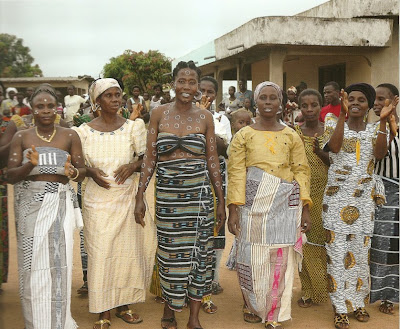 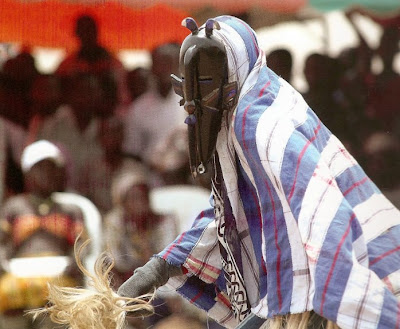 For a selection of our vintage textiles from Côte D’Ivoire see here and for further reading see here
Posted by Duncan Clarke at 03:28